Chairman says he's not a candidate for sixth term 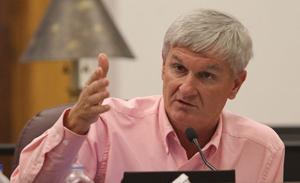 Kevin Little is the chairman of the Walton County Board of Commissioners.

MONROE, Ga. — Kevin Little will not seek a sixth term leading the county government in 2020.

Little, the only chairman of the Walton County Board of Commissioners in the current century, said Tuesday morning he won’t be a candidate for the Republican nomination.

He plans to finish out his term, which ends in December 2020.

He won his current term in 2016 without opposition.

After months of prayerful consideration and reflection on my 19 years serving the citizens of Walton County as Chairman of the Board of Commissioners, I have decided not to pursue a sixth term re-election in 2020.

I ran twenty years ago with a vision of making “Walton County a Great Place for Your Family and Mine!” I am proud of the many accomplishments founded in a spirit of teamwork and cooperation. I would like to thank my fellow commissioners, other elected officials, Walton County employees, and most importantly the citizens for allowing me to serve as Chairman.

As difficult as the decision is to not seek re-election, I can reflect fondly on the past years knowing I have laid a strong foundation for the future success of Walton County.

Little said he made the announcement now to “give someone that may be interested in running the opportunity to declare and build a campaign.”

Monroe businessman David Thompson has been campaigning for the GOP nomination for more than a year.

Little said he’s not making an endorsement at this time.

Thompson has criticized Little on taxes. Despite being a Republican in a solid-red county, Little has led a government that has not lowered residents’ property tax bills the last few years. The county did not take the rollback rate — the tax rate that keeps funding steady — but instead held the millage rate while property values increased, in effect causing homeowners to see a tax hike.

The chairman has said the growing county is responding to increasing demands for public services, such as police and fire protection.

Little has served as chairman of the Association County Commissioners of Georgia, the state’s county association. He was the first Walton County official to do so.

Little has been a leader — currently vice chairman — in the Joint Development Authority, an effort funded by Greene, Morgan, Newton and Walton counties along Interstate 20. The resulting Stanton Springs brought Takeda and Facebook to the Social Circle area, and the companies’ investment allowed the counties to retire their debt on the project.

The Board of Commissioners is scheduled to meet at 6 p.m. Tuesday at the Historic Walton County Courthouse.

Kevin Little is the chairman of the Walton County Board of Commissioners.