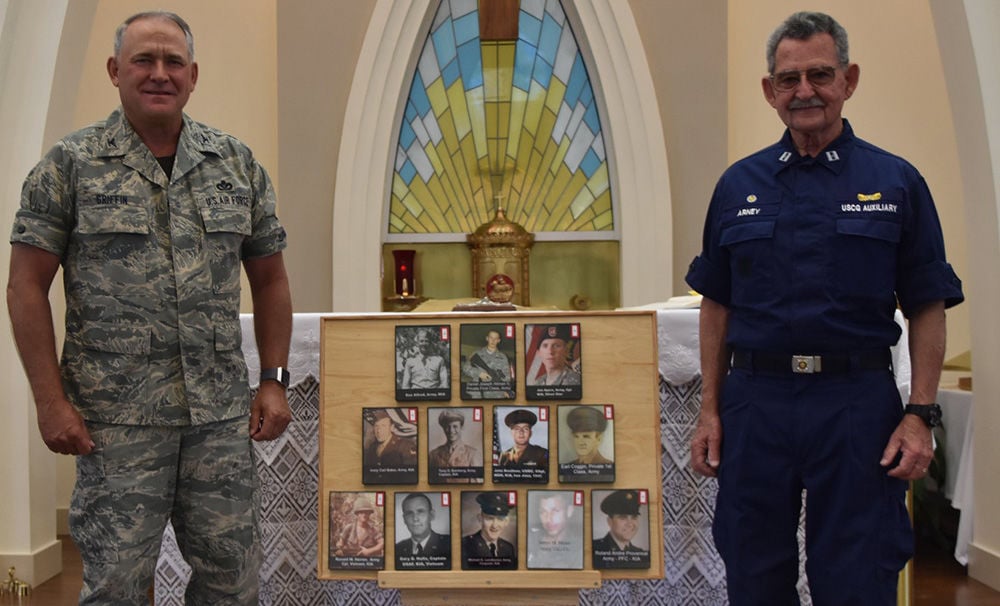 Crosses and American flags in front of St. Anna’s Catholic Church pay tribute to those who have died in service to the nation on Ascension Sunday, May 24, 2020, in Monroe, Ga.

Crosses and American flags in front of St. Anna’s Catholic Church pay tribute to those who have died in service to the nation on Ascension Sunday, May 24, 2020, in Monroe, Ga.

MONROE, Ga. — On Ascension Sunday, May 24, at St. Anna’s Catholic Church in Monroe, the Mass included a tribute to all men and women who have died while in military service.

As St Anna’s and the Archdiocese of Atlanta continue to follow COVID-19 restrictions for large gatherings, parishioners did not physically attend the Mass; however, the Mass was streamed live on Facebook and YouTube.

Retired U.S. Air Force Col. Bob Griffin and Retired U.S. Coast Guard Flotilla Cmdr. Tom Arney posted the American and Papal flags at the beginning of the Mass along with a memorial with the pictures of 12 fallen military members of the St Anna’s community.

Both retirees, who are also members of St Anna’s Knights of Columbus Council 14425, wore their battle dress uniforms from their time in the Air Force and Coast Guard, in recognition of those who gave their lives in combat.

Father Dan Toof and Deacon John Duffield were the celebrants of the Mass and along with the parishioners, prayed for the souls, by name, of their 12 fallen members during the Prayers of Intention.

Additionally, Toof incorporated Memorial Day thoughts during the homily including his own family’s loss of Capt. Tony Bamburg, a B-17 pilot of World War II who gave his life while saving his aircrew while piloting his crashing aircraft.

Toof’s remarks were highlighted by noting that Jesus gave the first “Last Full Measure of Devotion” at 3 p.m. on Good Friday, the same time Americans should pause with a national moment of silence to commemorate on Memorial Day.

At the end of the services Griffin, with Arney, presented remarks about the meaning of Memorial Day. He set the tone for his thoughts by quoting President Ronald Reagan who once said, “I have no illusions about what little I can add now to the silent testimony of those who gave their lives willingly for their country.”

His remarks reminded the parishioners of the history of Memorial Day but also the growing trend that for many Americans, “Memorial Day has come to stand for family barbecues, a day off of work, shopping and sales events, and the unofficial kickoff to the summer season.”

He asked if paying tribute is part of their typical Memorial Day activities understanding that for this year “typical” doesn’t really apply in our daily lives now as we all cope with the COVID-19 pandemic.

Griffin recognized “that while both inconvenient and necessary to protect lives, the COVID-19 driven pause in our typical routines can serve as an opportunity to refocus on the meaning of Memorial Day.”

He concluded by asking the parishioners “to pray for the Gold Star families in Georgia, and across the United States, who have lost loved ones defending our freedom … and for the safe return of our brave men and women currently serving abroad. Let us never forget their service, and may we forever honor their sacrifice.”

In addition to honoring their fallen military members with the memorial, St Anna’s Knights of Columbus installed crosses with American flags at St Anna’s entrance driveway and in front the of the church as a reminder to all who pass or visit of those who gave their last full measure of devotion in serving our country.