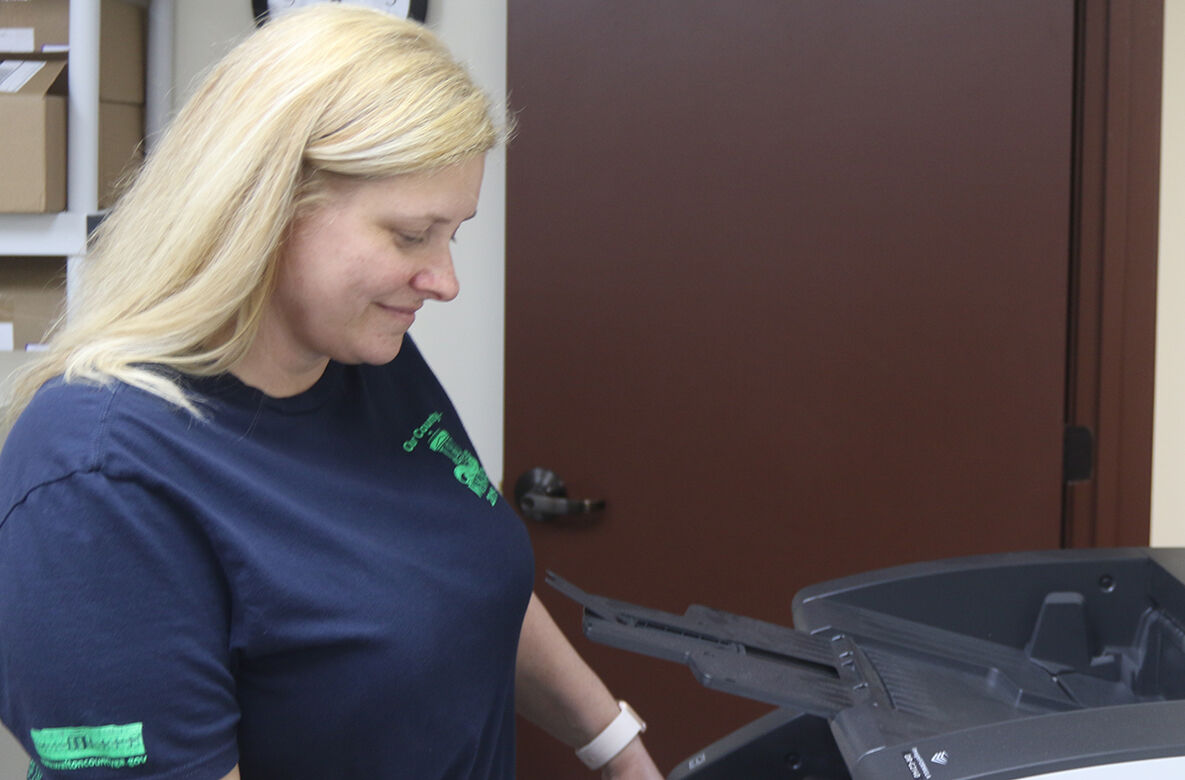 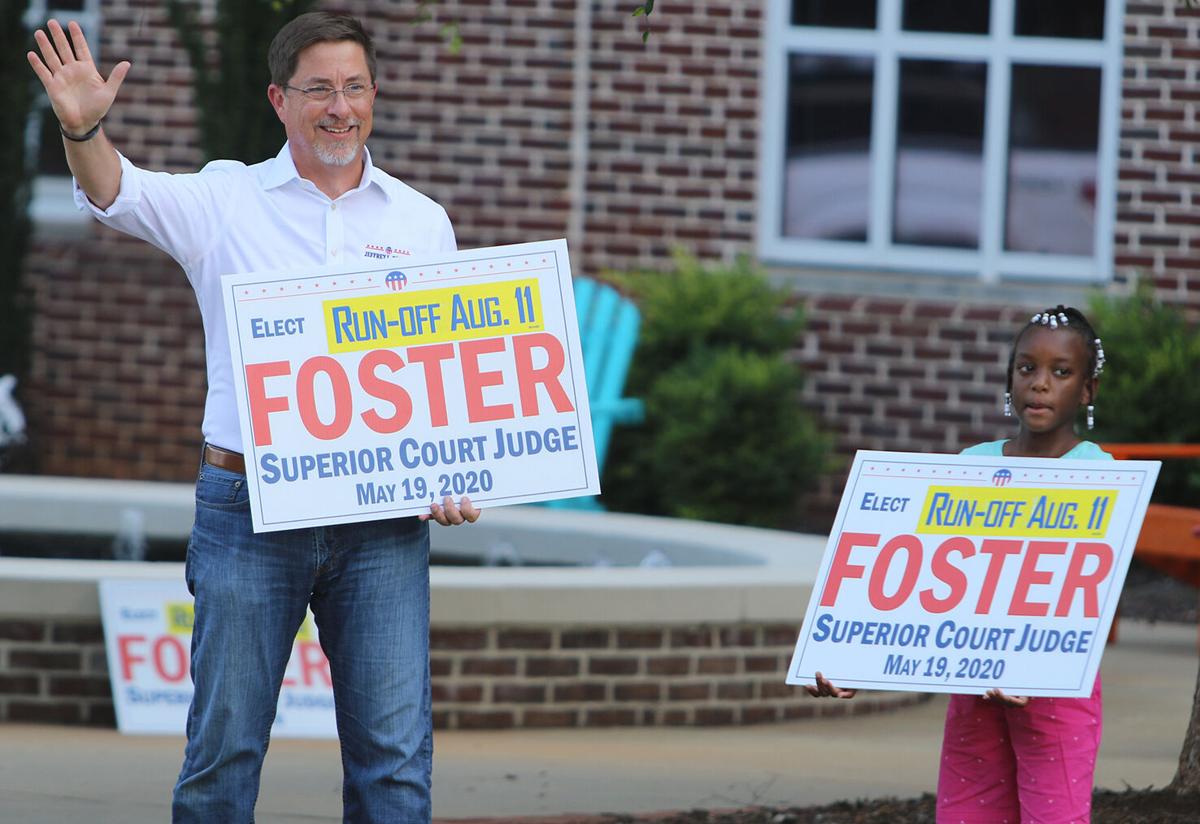 Jeff Foster campaigns in the final hours of voting in the runoff for a Superior Court judge’s seat in the Alcovy Judicial Circuit on Tuesday afternoon, Aug. 11, 2020, in Monroe, Ga. 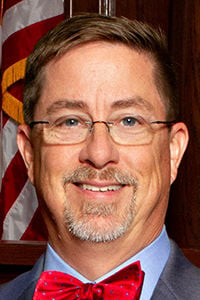 Jeffrey L. Foster is an attorney in Monroe, Ga., and judge of the Social Circle Municipal Court. 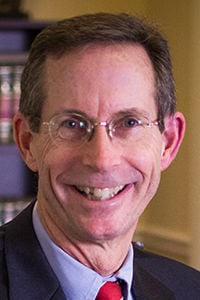 Robert H. ‘Bob’ Stansfield is an attorney based in Covington, Ga.

"I am humbled by outpouring of support and the trust placed in me by the residents of the Alcovy Judicial Circuit. I love this place and will strive to leave it better than I found it, and will honor my promise."

His opponent, Bob Stansfield, issued a statement as well after conceding:

"I would have never imagined a judicial campaign marked by a pandemic, date changes, a runoff race and the death of a sitting judge. I am grateful for the support of all the people who helped my campaign with their time and treasure and those who voted for me. I am especially indebted to my wife and daughter for their encouragement and their work shoulder to shoulder with me over these many months. I also want to thank my law partner who bore agreater load at the law office and was a constant source of encouragement. I congratulate Judge-elect Foster tonight on his election and hope that his tenure on the bench is marked with all the virtues that make a great trial judge."

10:49 p.m. UPDATE: Absentee ballots from his home of Newton County weren't enough to push Bob Stansfield over the top in the Alcovy Circuit judge's race.

Stansfield received 65% of the 4,786 absentee ballots counted Tuesday night, but it didn't overcome the huge margin Jeff Foster built in his home of Walton County.

Stansfield was expected to concede the race late Tuesday. 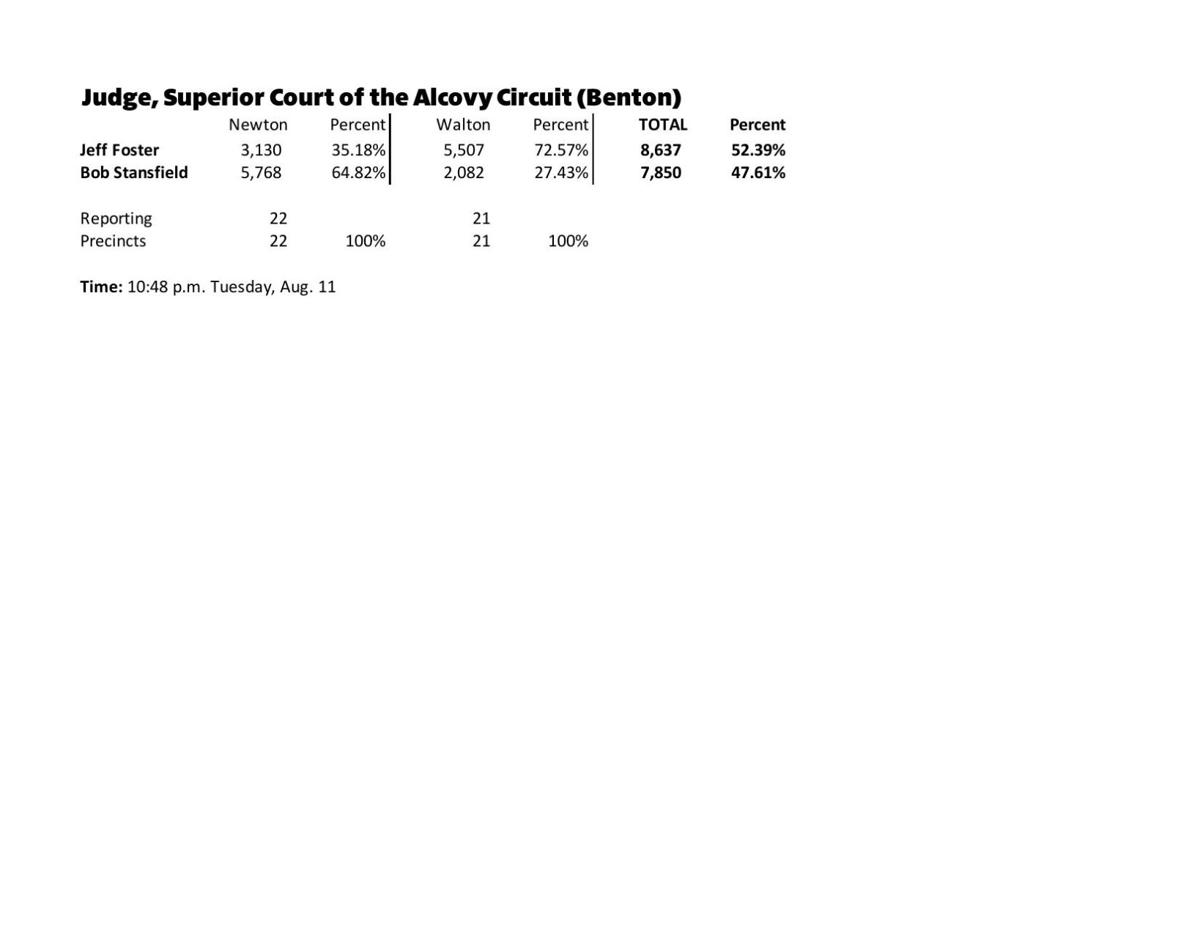 The difference will come down to how each candidate performs on those mailed-in votes in Newton County.

All that's left to count in Walton County are provisional ballots and any military ballots received by Friday, Jennifer Phipps, the county's director of elections, said. 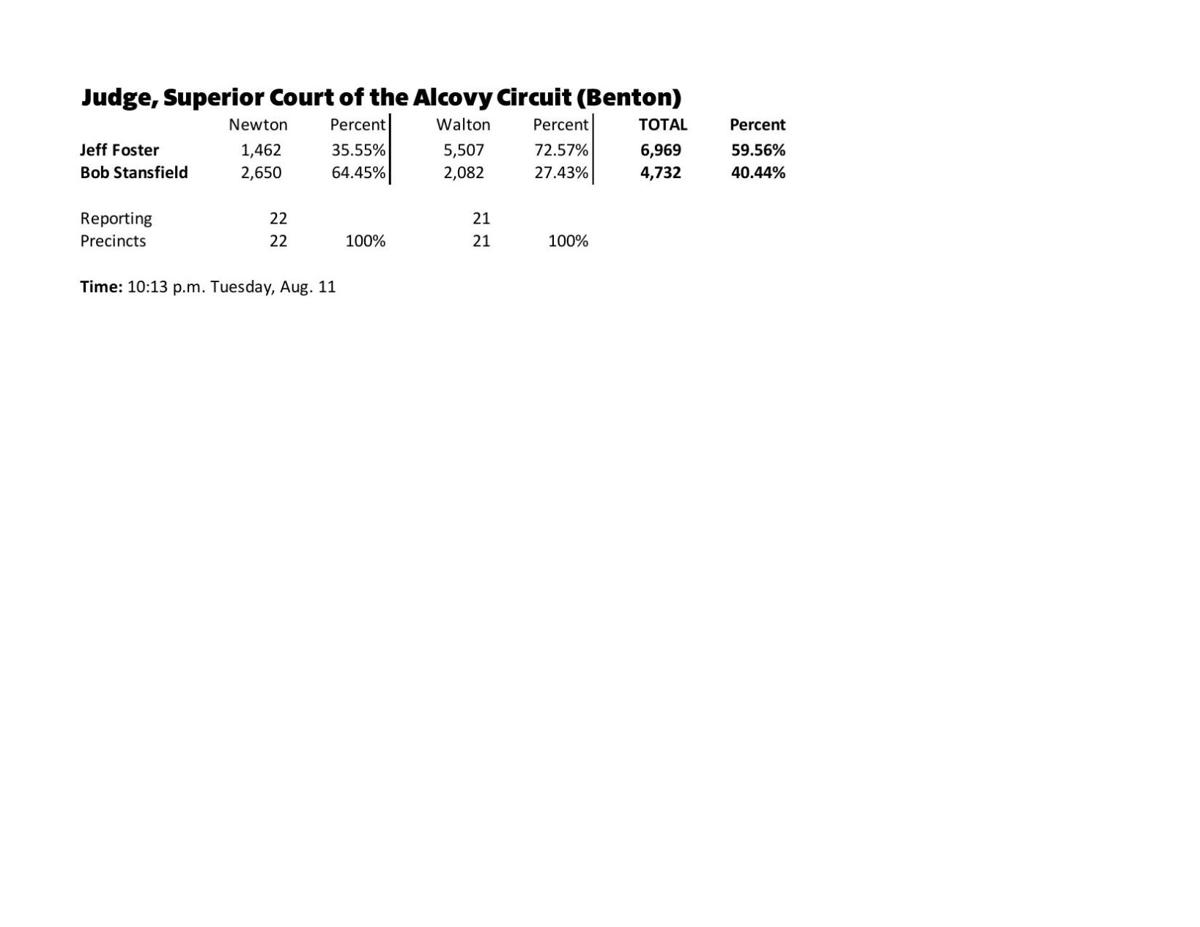 10 p.m. UPDATE: Both Jeff Foster and Bob Stansfield are holding off on declaring their race for a Superior Court judge's seat completed.

Foster said there are about 4,500 absentee ballots to be counted in Newton County and about 3,500 in Walton "which means were are at about 50% of the vote counted."

With all precincts in from day-of voting and advanced in-person voting in both counties, Foster had 57% of the vote against Stansfield's 43%. A large advantage in his home of Walton County buoyed Foster.

"With 10,000-plus absentee ballots yet to be counted, I am not prepared to make any comments," he said.

9:41 p.m. UPDATE: Jeff Foster isn't declaring victory despite a solid lead over Bob Stansfield in the Alcovy Circuit judicial race. He said there are about 6,000 absentee ballots remaining to be counted, split about equally between Newton and Walton counties.

"But a solid trend developed," he said.

Stansfield did not immediately return a request for comment.

9:29 p.m. UPDATE: With all precincts reporting in both Newton and Walton counties, Jeff Foster appears to have been elected as the next Superior Court judge.

Foster, of Loganville, ended up with just under 79% of 4,066 votes in his home of Walton County to overcome Bob Stansfield's Newton County edge. 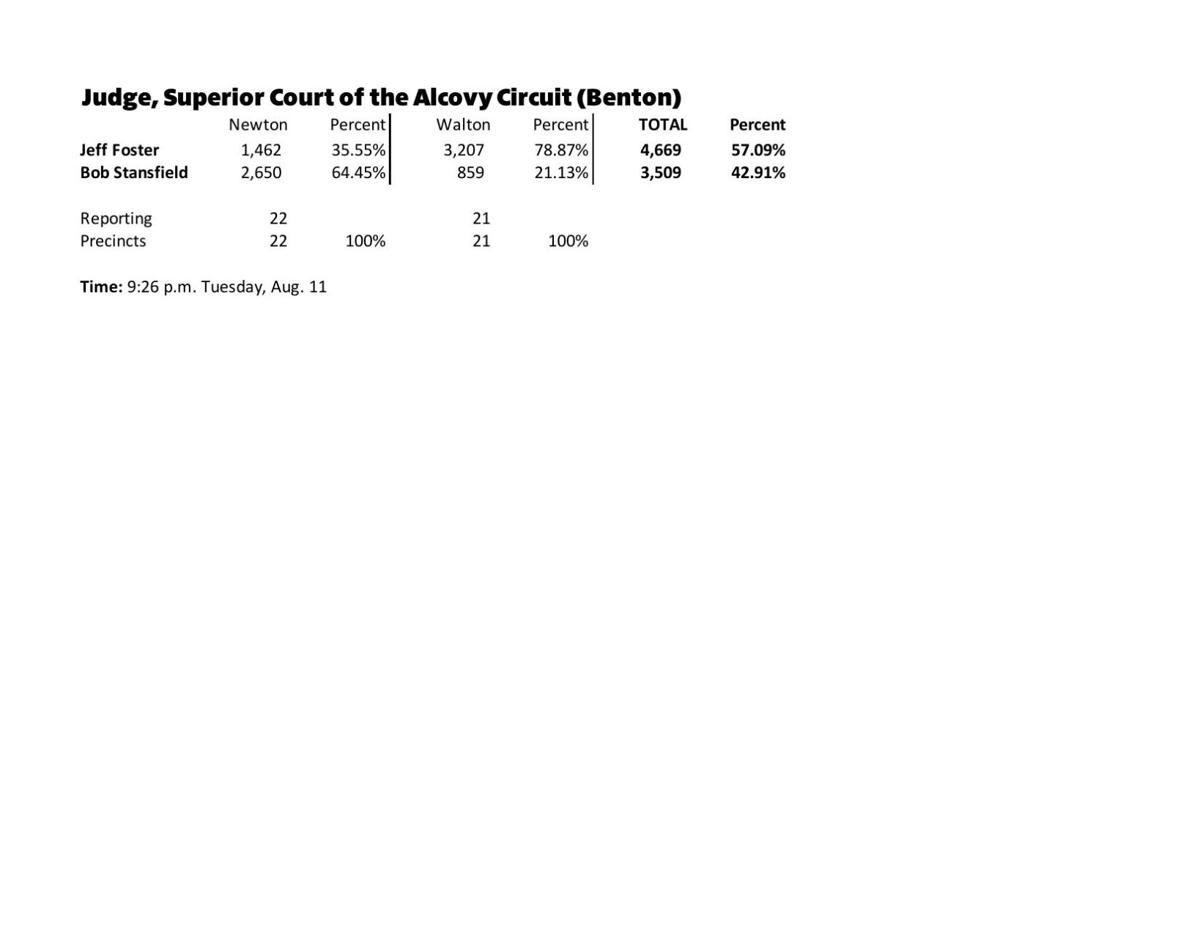 9:22 p.m. UPDATE: Jeff Foster said tonight he felt he had run a "good race" and was waiting to see final results come in from his bid to be a Superior Court judge.

With all precincts in from Newton County and 16 of 21 from Walton, Foster had 55% of the vote over Bob Stansfield in the runoff to succeed Judge Eugene M. Benton.

Foster said it was "a bit early for declarations," with absentee ballots still to be counted, but admitted he was "liking the trend."

9:14 p.m. UPDATE: All precincts are reporting in Newton County and Jeff Foster still holds a lead in the Superior Court race.

With all 22 precincts in from Newton County — but absentee or provisional ballots still to be counted — Covington attorney Bob Stansfield won the county with about 65% of the vote over Monroe attorney Jeff Foster.

8:58 p.m. UPDATE: Jeff Foster's large margins in Walton County are pushing him to a lead in the race for a Superior Court judge seat.

With 16 of 21 precincts reporting in Walton County, Foster has nearly 80% of the vote in his home county. That's more than offsetting the edge Bob Stansfield has run up in his home of Newton County.

Foster has 57% to Stansfield's 43% with 31 of 43 precincts in across the two counties of the Alcovy Judicial Circuit.

Stansfield is taking the edge in Newton County, but only by about a 2-to-1 margin.

8:43 p.m. UPDATE: The runoff for the Superior Court judge seat clearly is coming down to who will do better in his home county.

With 13 of 21 precincts in Walton County, Jeff Foster of Loganville has nearly 80.5% of the vote enough to open up a lead over Bob Stansfield of Covington.

Stansfield has 64.6% of the vote in Newton County with eight of 22 precincts reporting.

8:32 p.m. UPDATE: With eight precincts of 22 reporting in Newton County, Bob Stansfield is bringing in just less than two-thirds of the votes over Jeff Foster.

That brought Stansfield 20 votes ahead of Foster.

8:25 p.m. UPDATE: The first two precincts from Walton County are in and they show Jeff Foster, the attorney who lives in Loganville, has a practice in Monroe and serves as the Social Circle Municipal Court judge, opening up a big lead in his home base.

Foster got nearly 80% of the vote in the first Walton two precincts to report.

8 p.m. UPDATE: We have our first updates from the election, out of Newton County, and they show a big – but very early – lead for Bob Stansfield.

7:51 p.m. UPDATE: Nearly an hour after polls have closed, there have been no results released yet. As they are, we'll update here.

Polls have closed in the most closely contested local judge’s race in a generation.

The runoff between attorneys Jeffrey L. "Jeff" Foster of Walton County and Robert H. "Bob" Stansfield of Newton County was Tuesday. The winner will become a Superior Court judge in the Alcovy Circuit in January, succeeding Judge Eugene M. Benton of Monroe.

Flint Circuit Chief Assistant District Attorney Cheveda McCamy of Covington was 514 votes behind Stansfield to miss out on the runoff.