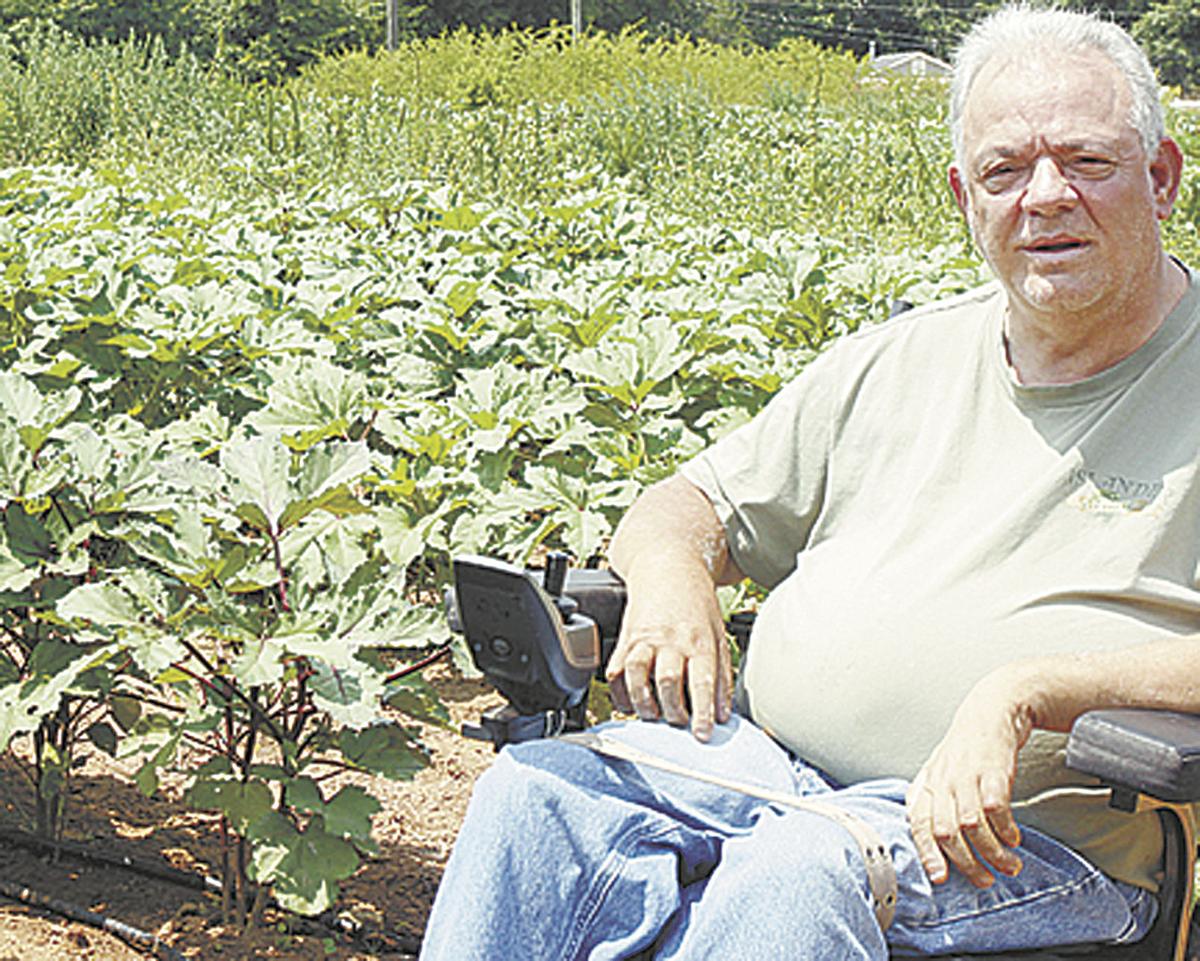 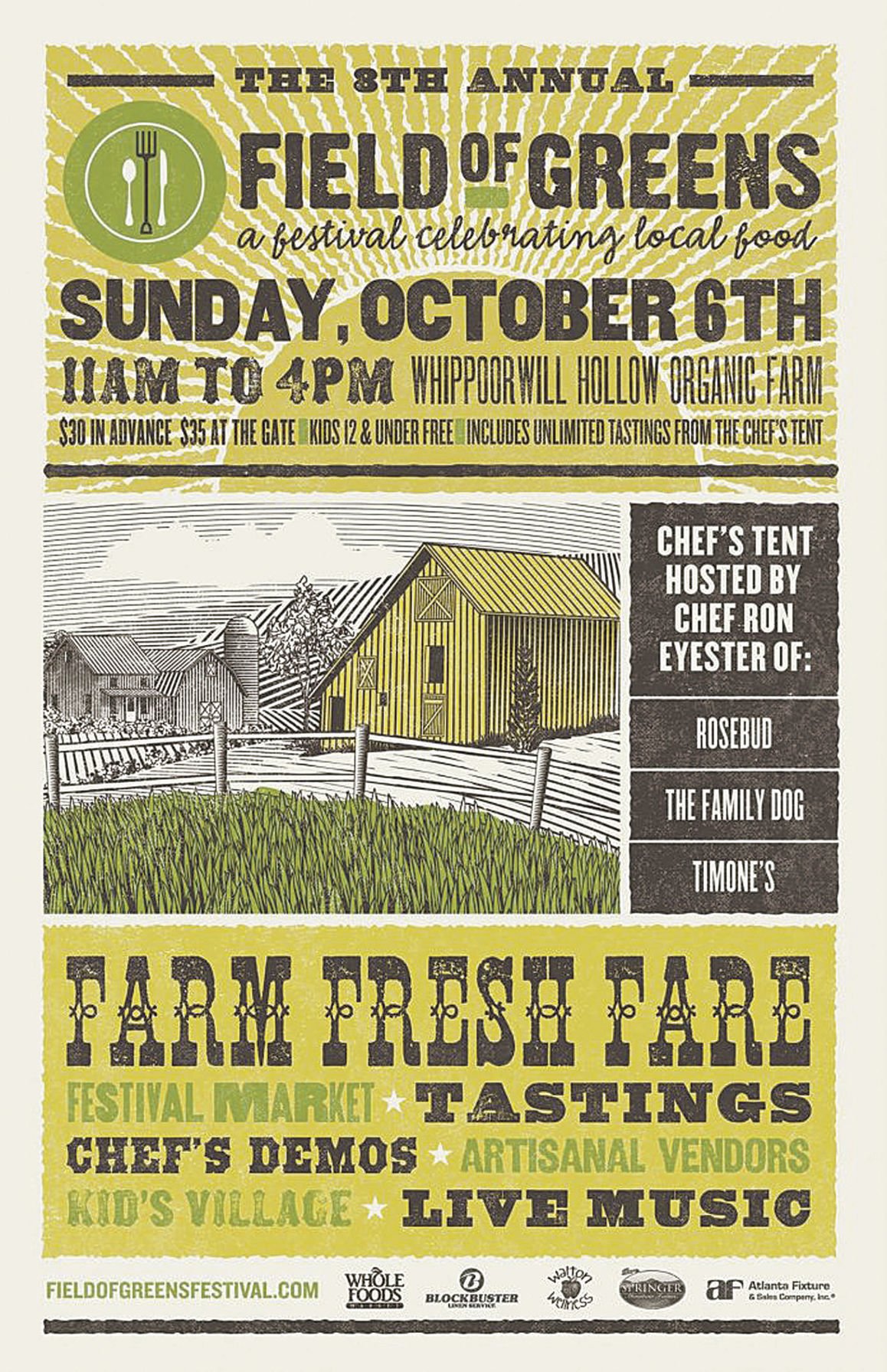 A flier from the Field of Greens festival in 2013. The events attracted chefs and guests from all over the metro area in its heyday. 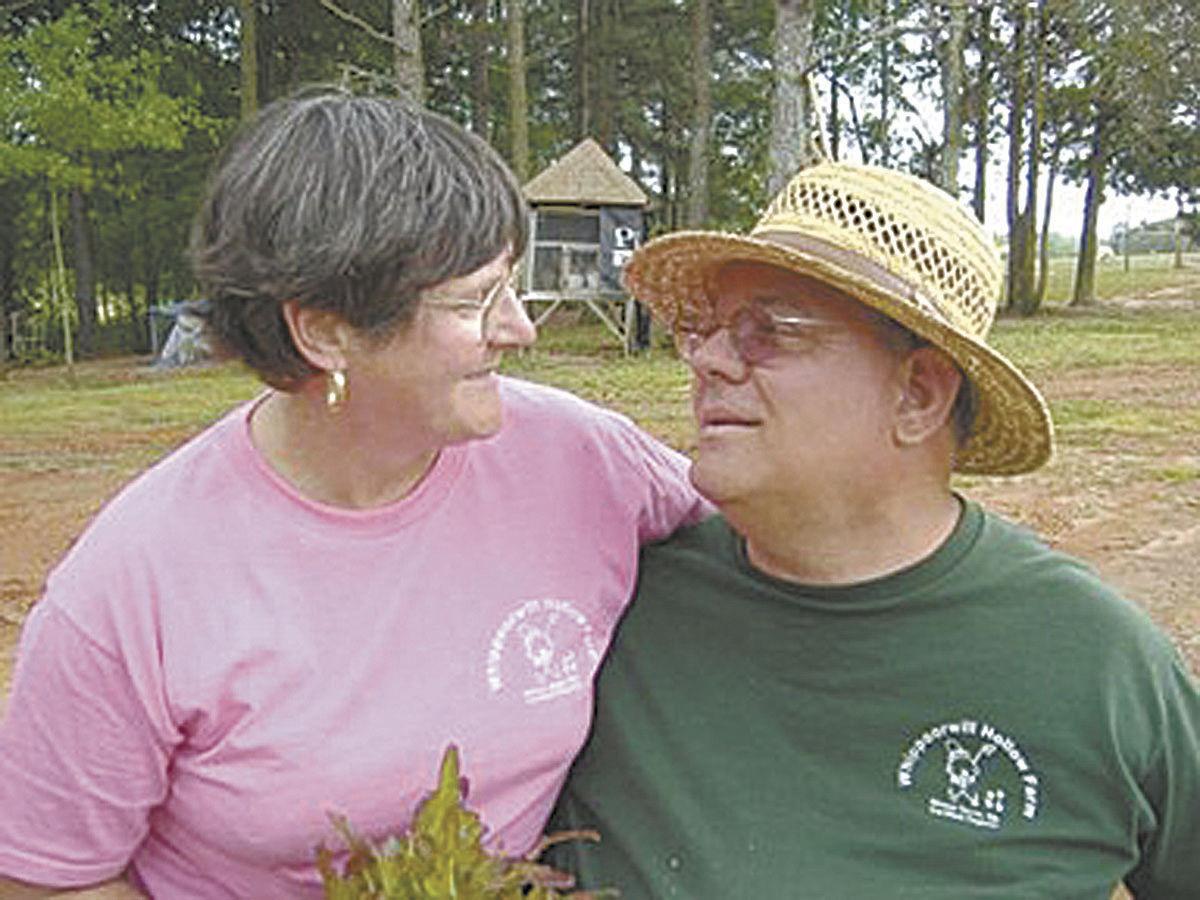 Hilda and Andy Byrd in 2007. Hilda died in 2009 and Andy died in March. They opened the farm to try to fight off Hilda’s cancer. 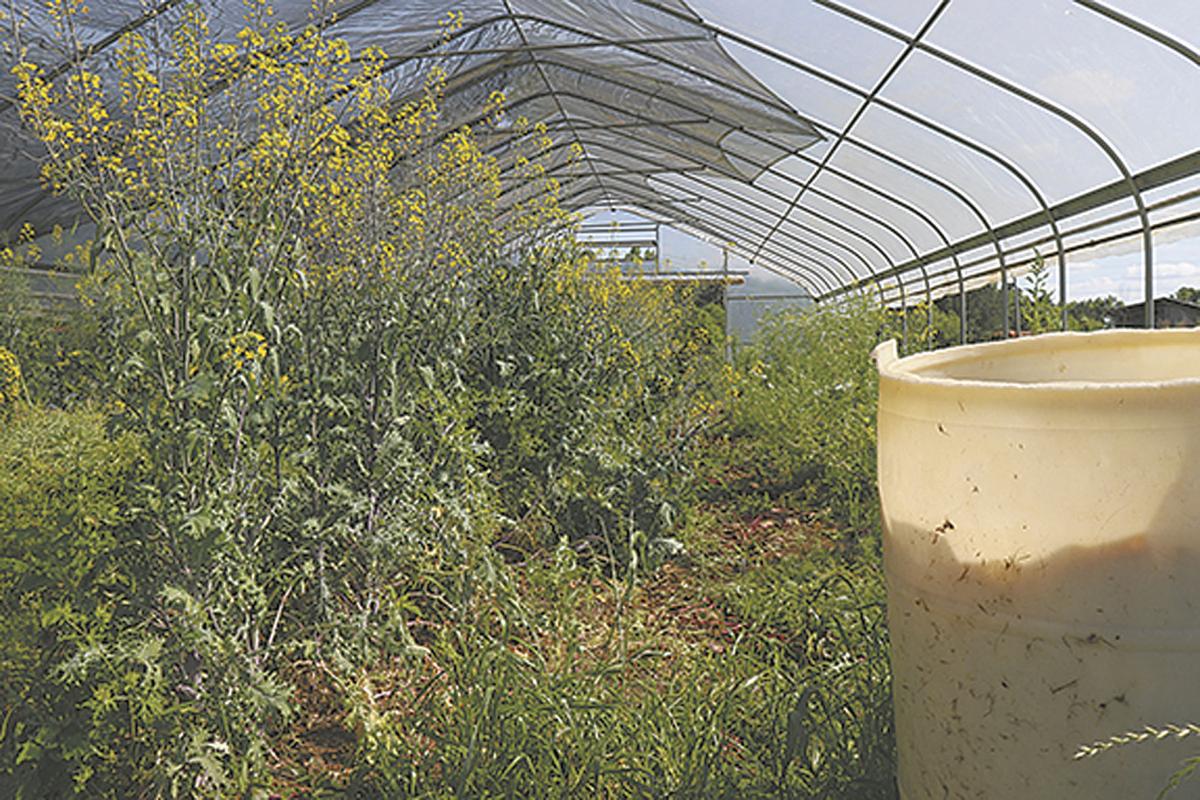 Weeds have overtaken much of the once-thriving farm.

A flier from the Field of Greens festival in 2013. The events attracted chefs and guests from all over the metro area in its heyday.

Hilda and Andy Byrd in 2007. Hilda died in 2009 and Andy died in March. They opened the farm to try to fight off Hilda’s cancer.

Weeds have overtaken much of the once-thriving farm.

There’s only a stray few stalks of chard, a cluster of Muscadine grapes, and a few bushes of unripe, unpicked blueberries.

The water towers are empty. The sign out front is battered. The rest is just weeds and the slow buzz of bees.

It will be sold off, per instructions of its late owner and founder, Andy Byrd, who died a little over a month ago.

But Byrd left behind more than just some weed stricken fields and rusted tools. He and Whippoorwill Hollow were instrumental in building interest in local food in the Walton County area and beyond.

Today, shoppers can find organic carrots and peppers at Kroger. Farm-to-table is the buzziest term in dining.

But when Byrd started Whippoorwill Hollow, that was not the case.

“I hesitate to say state, but Whippoorwill Hollow was definitely the first organic farm in the metro-Atlanta area,” said Dede Harris, the executive director of Walton Wellness and longtime friend of Byrd’s.

“Before he died, I told him, ‘All this stuff with food that’s happening around here, it’s on your heels.’ He helped blaze a path.”

Byrd was one of the original and most consistent vendors at the Monroe Farmers Market, for instance, which opens for its seventh season this Saturday.

For years, he hosted Field of Greens, a food festival that brought dozens of Atlanta chefs to the farm in Walnut Grove and hundreds of visitors.

He lobbied the local branch of the Department of Agriculture to offer more conservation grants geared toward smaller farmers like himself.

But perhaps the most remarkable thing about Byrd was that he was able to operate a farm from a wheelchair.

Byrd was paralyzed in a diving accident in 1980 when he was 21, according to his brother-in-law Mack Needham. He could not move his legs, and could barely move his arms.

The Walnut Grove native wanted to start growing organic food when his wife Hilda was diagnosed with cancer in the late 1990’s. Both of them thought eating more food without chemicals could slow the advance Hilda’s disease.

The couple had bought 74 acres outside of their hometown in 1997. There were a few blueberry bushes on the land, but in 2002, they started turning it into a farm.

Challenges abounded. Byrd was an able salesman, planner and visionary, but he could only work so much.

Finding people who could was difficult, Needham recalled.

“We had this one guy whose first name I can’t remember, but his last name was ‘Beck’ and he put ‘Hard Working’ as his middle name on his resume,” Needham said.

“Well Andy put him to work pulling weeds one afternoon. He stopped after about two hours and said he needed to go buy a drink at the gas station. We never saw ‘Hard Working Beck’ again.”

Hilda helped out when she could. A handful of college students and a rotating cast of part-time laborers and volunteers kept the farm afloat for much of its existence.

Sharon Bramon worked at Whippoorwill Hollow about five years ago and remembered hours spent planting vegetables and listening to Byrd whir around the farm on his all-terrain wheelchair.

“He did not let it slow him down,” she said.

Slowly, Whippoorwill Hollow became a prosperous farm. Byrd sold much of his produce at the Morningside Organic market in Atlanta, as well as selling to some restaurants in Athens and Atlanta.

Hilda died of her cancer in 2009, but credited the farm with buying her an extra 10 years, Harris said.

But there were more problems than just a lack of hands.

Whippoorwill Hollow sits on a ridge, with the land falling away on three out of four sides of the farm. Underneath, past a thin layer of soil, is rock.

That meant Byrd had constant water shortages. The wells he dug never produced enough water. Rain drained away too quickly.

He went to the local USDA branch for help around 2007. Jose Pagan, who administers grants to farmers who institute conservation practices, said Byrd wanted to install a drip irrigation system on his farm.

As opposed to traditional irrigation techniques that spray water over fields, drip irrigation systems run tubes with water permeable strips along the bases of plants. When water flows through the tubes, some of it drips onto the roots.

It’s a much more efficient way to irrigate, especially for someone facing water shortages. Byrd didn’t have the money to build it himself and, at the time, Pagan’s office and his higher-ups didn’t have grants available for drip irrigation or small farmers.

“My bosses thought he was just a gardener,” Pagan said.

“We didn’t realize how much you could grow on a small farm. Plus farmers in Georgia didn’t usually have water shortage problems.”

For years, Byrd begged for the USDA to reconsider. It paid off in 2009, when he got a grant to install drip irrigation.

“And he made that place bloom,” Pagan said.

“He was very patient with us...He reshaped ideas about small farms and farmers with disabilities. Today, drip irrigation is one of the main things we do for farmers everywhere.” Pagan said.

Whippoorwill Hollow blossomed, partly thanks to the new system.

Byrd and Hilda had started an event called Field of Greens in 2005, where Atlanta chefs would come out to the farm and cook local for hungry guests.

It was simple, at first, “A farmers market, a fiddler, some lambs to pet, and a stroll across a pretty farm just a few miles from the big city,” Atlanta Magazine said.

It grew into something else, however. By 2013, 30 chefs and over a thousand guests were coming to Whippoorwill Hollow, with the proceeds benefiting farms-and-food-based nonprofit Slow Food Atlanta.

“It was almost as if Atlanta packed up and came to Walnut Grove,” Harris said.

Byrd saw it as a chance to evangelize about the benefits of local food.

“I think farmers as a whole, what we’re trying to get across to the community is we need to get the carbon footprint down and we need to interest the community to come and support their local farm...People just don’t know or realize where their food comes from” Byrd said in a video about the event.

Byrd also welcomed numerous school groups for field trips. He believed it was important for kids to “get their hands and feet in the dirt,” as Byrd put it.

However, in 2015, Byrd’s health took a turn. Like many quadriplegics, he struggled with bedsores. He also developed cancer in his mouth and had to have part of his tongue removed.

It was the last year he held Field of Greens. Production on the farm also dropped off, as Needham aged and Byrd spent more and more time in the hospital or in bed.

“It had gotten run down in the last four or five years,” Needham said.

At the end of 2018, Byrd and Needham decided that the winter crop would be Whippoorwill Hollow’s last. They would not plant anything in the spring for the first time in 17 years.

The weeds are everywhere now.

Byrd got sicker and sicker early this year, Harris said. He died of pneumonia on March 27 at age 62.

“I just had a lot of respect for Andy not giving up,” Bramon, the farm worker, said.

“He loved the outdoors and he found a way to spend most of his time outside. It’s just a testament to the human spirit.”

“This is not a tragic death,” Harris said.

“He will be very well missed, but he had battled with his health for so long. He’s free from that wheelchair now. I’m not sad for him. We’d talked about this for a while, and I think he was ready.”