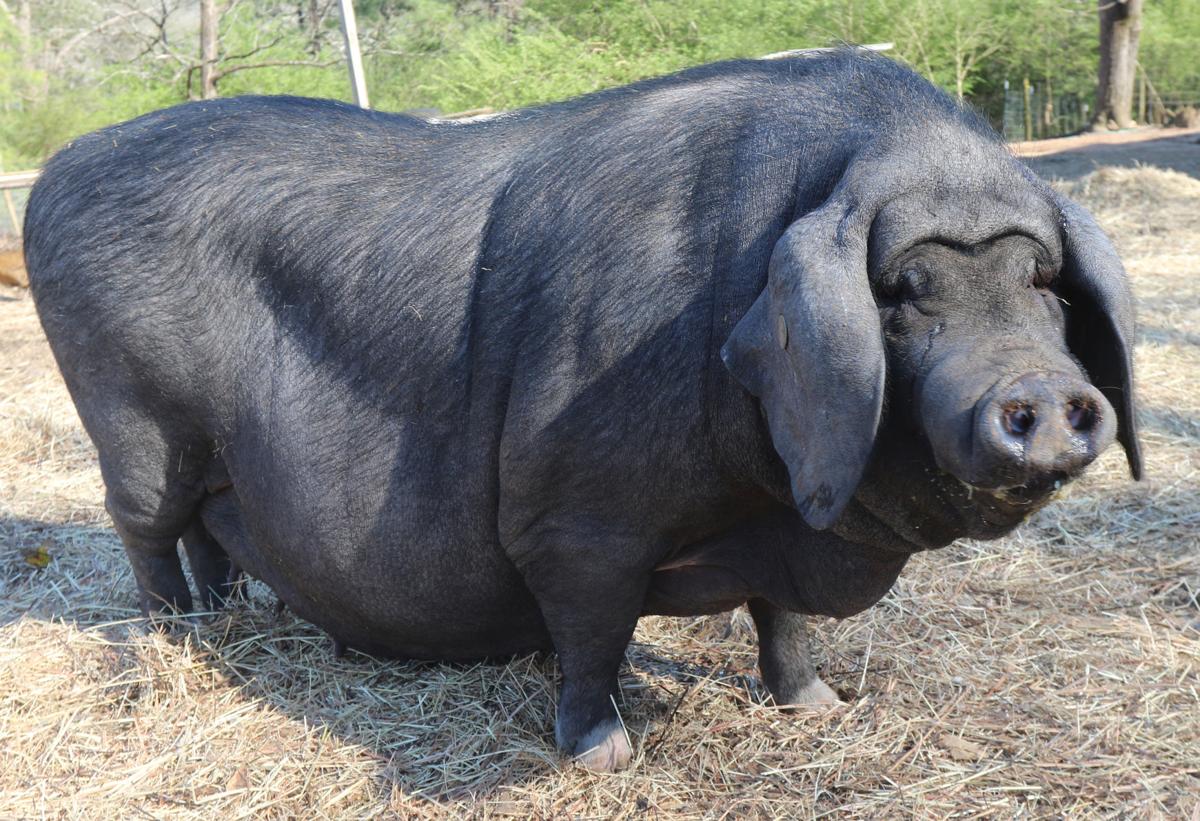 A rare Meishan pig is pictured at Jensen’s Reserve in Loganville. 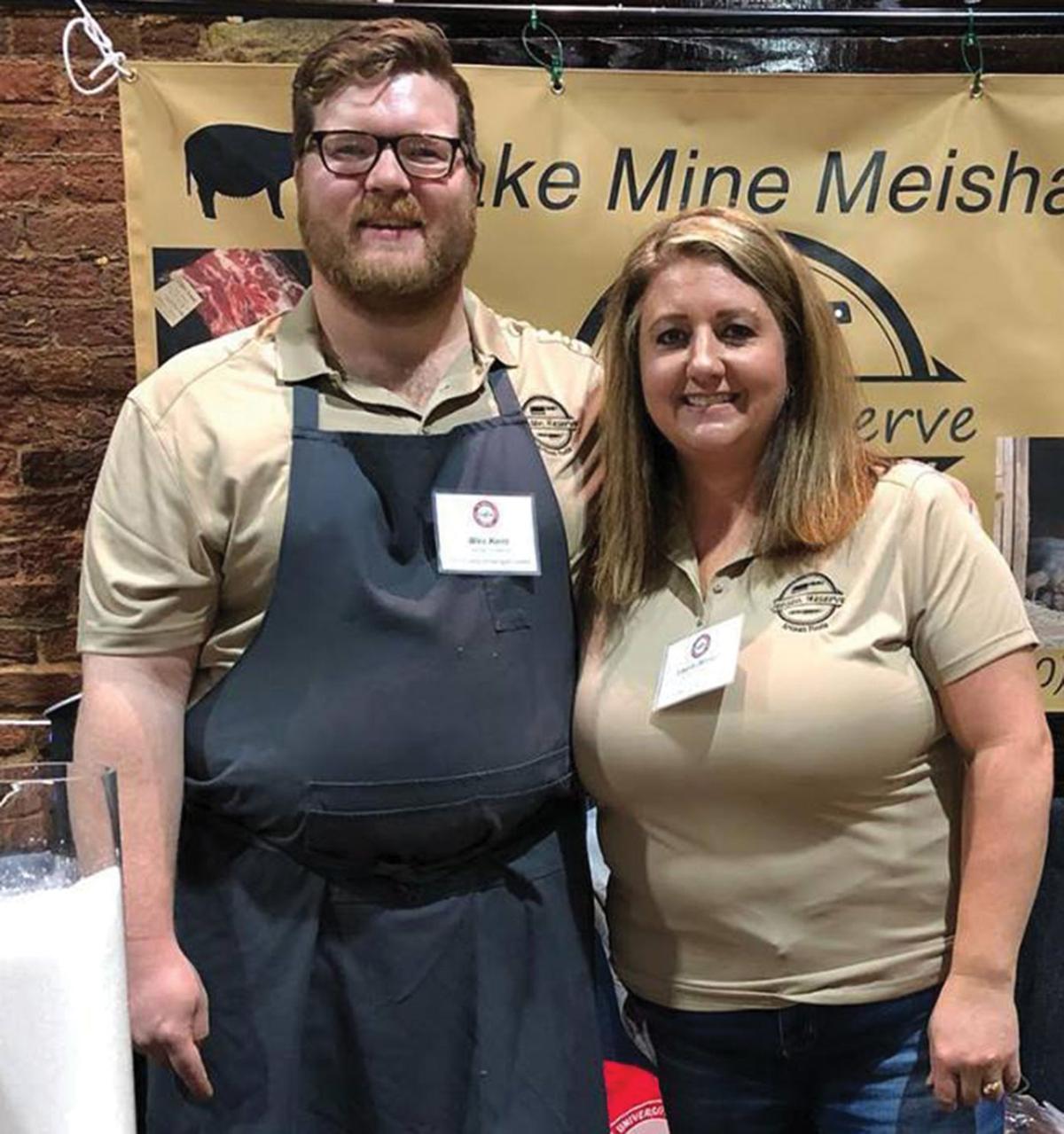 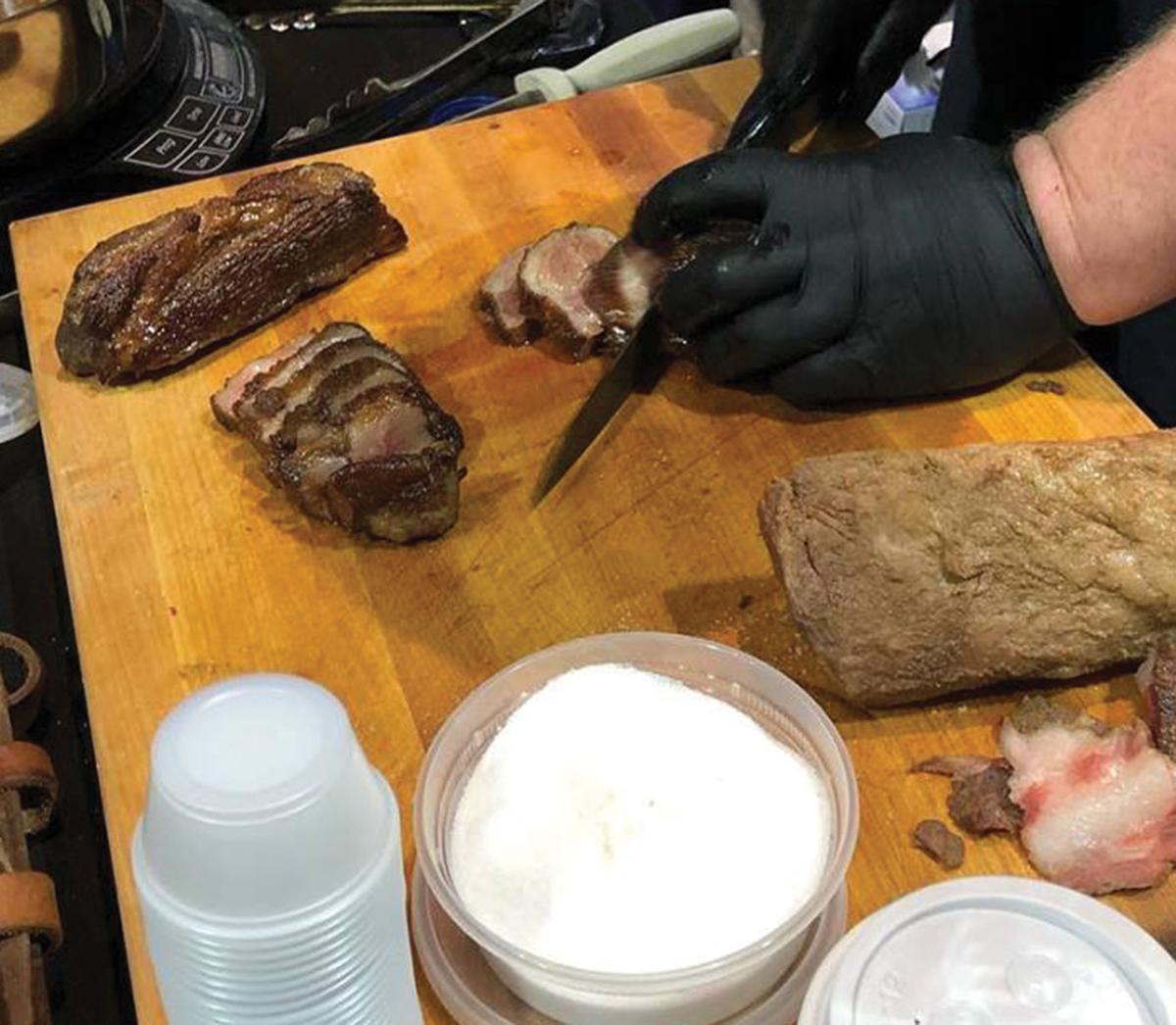 Chef Wes Kent cuts into the Coppa Roast that Laura Jensen entered into the finals of the Taste of Georgia contest Tuesday, March 19, 2019, in Atlanta.

A rare Meishan pig is pictured at Jensen’s Reserve in Loganville.

Chef Wes Kent cuts into the Coppa Roast that Laura Jensen entered into the finals of the Taste of Georgia contest Tuesday, March 19, 2019, in Atlanta.

The pigs at Jensen’s Reserve, a small farm in Loganville, do not look like most pigs.

They’re black and have huge, floppy ears that cover their beady eyes. They have wrinkled faces and big, upturned noses. They are not, strictly speaking, cute.

They don’t act like most pigs either. Unlike typical domestic pigs, which often attack and eat smaller animals, Jensen’s pigs are docile and calm. They wander the grounds of the farm, mingling with the chickens and the dogs.

These pigs are called Meishan pigs, and according to estimates by the Livestock Conservancy, there are less than 2,000 of them in the world.

About 25 of them live at Jensen’s Reserve, where Laura Jensen raises them for meat. Her collection is one of only a handful of Meishan herds in America and one of two in Georgia.

“It’s more like a steak than white meat pork,” Jensen says of the meat, which is much darker, richer and more marbled then typical pork.

That difference was enough to recently propel Jensen and her pork to the finals of the Flavor of Georgia competition, a contest that showcases foodstuffs from small farms around the state.

Jensen entered a Coppa Roast, a cut from the top of the shoulder, as well as prosciutto. Judges selected the Coppa Roast from 133 other entries to be part of the 33-product final.

She enlisted local chef Wes Kent to cook the roast for the contest. He said there is a huge difference in Meishan pork versus the typical stuff.

“It’s the difference between regular steak and Wagyu,” he said.

“It’s fattier in a good way. It just has much more flavor.”

Jensen didn’t win, but she was thrilled to make the finals. She hopes through the competition, and through her work on the farm, she can help build Meishan populations out of critically endangered status by putting Meishan meat on people’s plates.

“It’s sort of weird to say, but the best way to ensure the pig’s survival is to eat them,” she said.

Jensen got into raising Meishan pigs because raising other pigs was getting to be such a nuisance.

Around 2014, she started raising more of her own food, like chickens and pigs. She and her daughter suffer from psoriatic arthritis, but found they felt better when they ate food raised in their backyard.

But the pigs were a problem. They tore up the land. They terrorized the chickens. The whole family was scared of them. One day, the five pigs Jensen was raising tore apart her kid’s favorite chicken.

“They were like velociraptors. And that was when I said I was out,” Jensen said.

She started looking for alternatives.

Meishan pigs were originally raised in China, where farmers bred them for thousands of years, jealously guarding their bloodlines and keeping out of foreign hands, according to the American Meishan Breeders Association.

Those three herds were interbred and kept separate for 20 years. But between 2008 and 2010, the University of Iowa dispersed its herd. By 2016, the USDA and University of Illinois had done the same.

Two of those pigs ended up in the hands of one of Jensen’s distant Facebook friends. He said they were perfectly docile animals. He agreed to sell the pair to Jensen in the summer of 2016.

There wasn’t exactly a manual for how to raise these rare pigs when she first got them, Jensen said.

Conventional pigs are raised on high sugar and high fat diets, because they grow quickly and are much leaner then Meishan.

Giving that same diet to a Meishan pig would end up with a very fatty pig. So Jensen had to figure out what diet worked best for them through trial and error, but has settled on a high protein diet.

Jensen can raise a pig to size in about nine to 10 months, allowing her to send five or six a month off to be processed, meaning she’s taken up raising Meishans full time.

She’s grown her brand on social media and operates a little farm store on her property where she sells all sorts of Meishan-related products, from bacon and prosciutto she cures herself to chops and other cuts of pork.

The whole thing has been a bit of adventure for Jensen.

“It’s been a lot of just figuring it out what they are because there really isn’t much out there. We’re writing the manual on them right now,” she said.