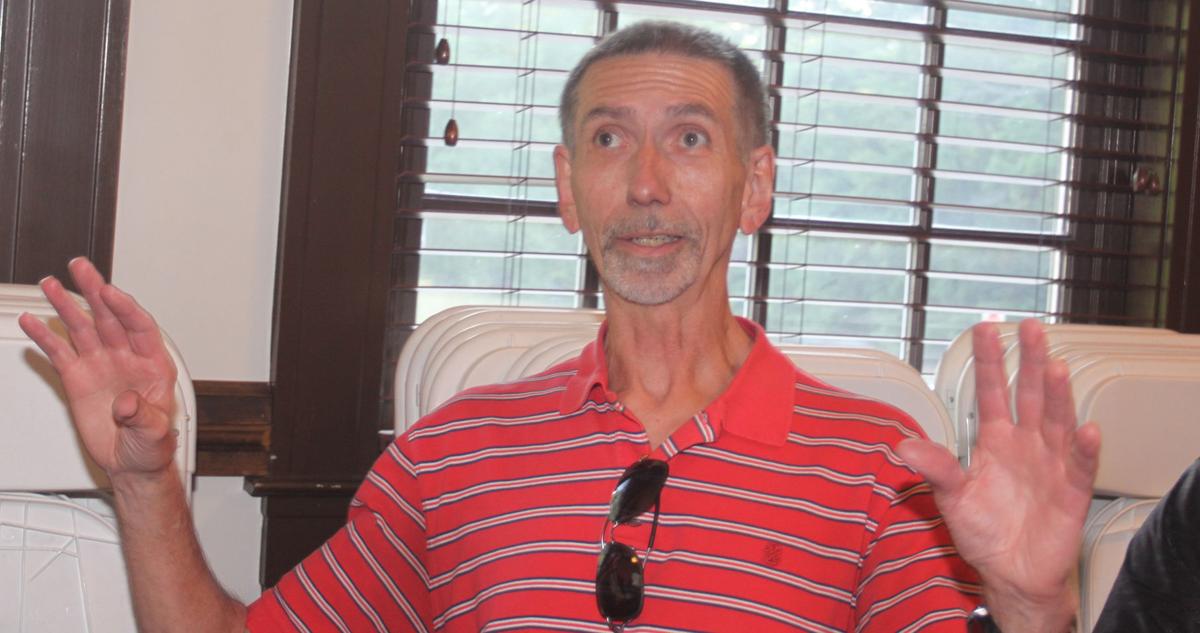 Former Mayor David Dickinson talks about the need for better housing. ‘We have a community that has been taken advantage of, for lack of a better word, by slumlords,’ he said at the meeting Thursday, May 11, 2017. Dickinson, an attorney and former Municipal Court judge, was elected to Monroe's city council in 2018. 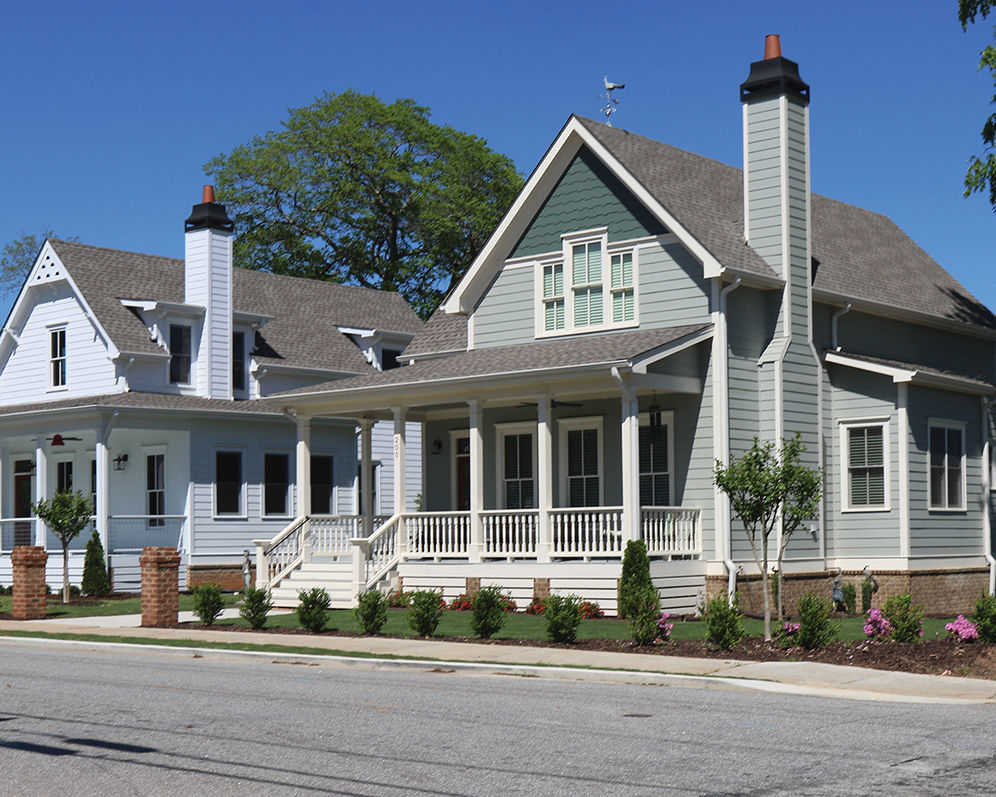 The “Napa Houses” on the corner of Midland, Madison and Highland. Dickinson, and others on the Monroe Council, has pointed to the four-home project as an example of the type of homes he’d like to see more of.

Former Mayor David Dickinson talks about the need for better housing. ‘We have a community that has been taken advantage of, for lack of a better word, by slumlords,’ he said at the meeting Thursday, May 11, 2017. Dickinson, an attorney and former Municipal Court judge, was elected to Monroe's city council in 2018.

The “Napa Houses” on the corner of Midland, Madison and Highland. Dickinson, and others on the Monroe Council, has pointed to the four-home project as an example of the type of homes he’d like to see more of.

In an interview before he was elected to the Monroe City Council, David Dickinson (D-8) pointed to housing as an issue he was particularly interested in addressing if he was elected.

“I think we’re (Monroe) sort of at another crossroads because things were really developing pretty quickly, then the recession hit, then we hit a 10-year lull, and now I think things are about to crank up again,” he said.

“I have some ideas about where we need to go because we are in a situation where Monroe can go in a very good direction or still kind of flounder around in the wrong direction.”

Since then, the former mayor and municipal court judge has been the council's most vocal member on housing issues. Anytime a developer comes before the group asking for a re-zone, Dickinson has the most, and toughest, questions.

Here, he makes the case for what kind of housing he wants to see in the town he's lived in for over 40 years.

Walton Tribune: You talk a lot about “quality housing” and how Monroe needs more of it. Can you define that?

David Dickinson: Quality housing is either new housing or renovated existing housing that is well built according to best practices and standards and aesthetically appropriate for the community in which it is built.  Unfortunately, many developers attempt to build houses to the minimum standards and cut corners wherever possible to maximize profits.  This type of developer never considers the aesthetics of houses and subdivisions in terms of whether the houses “look good”, whether the houses will hold up for decades, and whether they “blend in” with the local community.  With respect to a lot of the housing already existing in Monroe, we have far too many units in the hands of “slumlords” whose sole objective is to maximize their profits by refusing to spend the money required to properly maintain the units to provide even the most basic habitability standards..

WT: What is traditional development and why do you think it’s better than more modern styles?

DD: Traditional Neighborhood Development (TND) emerged in various states in the early to middle 1990s as a response to the automobile centered suburban sprawl that began in the United States in the 1950s.  The basic principle of TND is to restore the development patterns that were utilized prior to the 1950s.  The key concepts include providing the following:  a range of housing types in terms of design, size and function; a coherent network of connected streets, blocks and neighborhoods; stores, restaurants, schools and churches within walking distance of residences; multiple parks and playgrounds; a defined “town center”; and an emphasis on the “human scale” rather than the “automobile scale”.  When TND concepts are applied to existing towns and cities, there is an emphasis on utilizing infill development and adaptive reuse of existing structures as well as utilizing the infrastructure that already exists (streets, utilities, fire/police protection).  This development pattern saves local governments and their taxpayers from shelling out the enormous amounts of money required to provide these items to newly incorporated areas.  This pattern also prevents the traffic congestion that comes with an ever increasing “sprawl footprint”.  I believe TND is preferable to the typical sprawl subdivision development because it creates far more housing options, preserves the sense of a unified community, promotes the ideal of “live, work, play” in the local environment and saves enormous amounts of taxpayer money..

DD: There are several reasons but I think the most significant is our post- World War II shift to an automobile centered lifestyle.  As we transitioned to a society in which the standard is for every family to have multiple cars, we developed the pattern of living in one area, working in another and shopping in yet another.  This is the standard “suburban sprawl”.  This pattern worked until we reached the saturation point on our roads and streets and the driving to multiple points became a burden instead of a convenience.  Getting to this point took 50 to 70 years so it is unrealistic to think we will change our development patterns in a handful of years.  However, the movement toward reinstituting the traditional pattern grows stronger every day and the developers will change how they build to meet the demands of the market.

WT: Do you worry about making Monroe unaffordable for working class people? Why or why not?

DD: First, I think it is essential to clarify what we mean by “working class” as that term has somewhat different connotations depending on whether it is used in an economic, political or sociological context.  Assuming that it denotes people who are wage earners (blue, white and pink collar) as contrasted with salaried management or professional persons, I do not worry about that.  Monroe has numerous neighborhoods where the houses are affordable for various income levels.  Furthermore, the City recently enacted changes to our zoning regulations that I believe will encourage substantial infill developments that are affordable to various income groups.  As of 2019, the average value/cost of a house in Monroe is over $50k less than the average for Walton County collectively and one of the main reasons people give for moving to Walton County is that housing is more affordable than several nearby counties.  We continue to work to attract industries and businesses that pay higher wages and there are a lot of “skilled labor” jobs in the American economy that pay very well (auto technicians, welders, etc).  In short, the notion that working class people will be priced out of housing in Monroe has no factual basis whatsoever.

WT: Who or what has been the biggest influence on your thinking about housing and development?

DD: I cannot name any single person or entity.  My perspective is the result of my life experiences including decades spent here and seeing both the good and the bad on the local level as well as what has occurred in other communities across the country. Also, I grew up in deep Appalachia in the 50s and 60s where having decent housing was a challenge for my family and those around us.  Based on the totality of those experiences, I believe that the proper role of government is to provide the regulatory network to encourage quality development by private enterprise.  I am not a proponent of government being directly involved in providing housing as those programs have mostly resulted in failure and the creation of far more problems than solutions.