The floor design plans for the new library show the future for W.H Stanton Library. The new wing, on the right, will feature a children’s section that is linked to a garden. 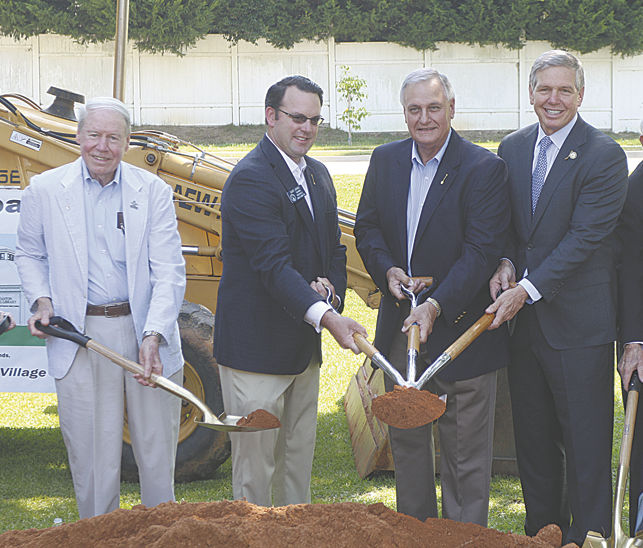 Dr. David Allen, a friend of Gov. Nathan Deal, Sen. Burt Jones, Mayor Hal Dally and Rep. Bruce Williamson were among the many who helped make the library expansion possible and participated in the ceremony.

The floor design plans for the new library show the future for W.H Stanton Library. The new wing, on the right, will feature a children’s section that is linked to a garden.

Dr. David Allen, a friend of Gov. Nathan Deal, Sen. Burt Jones, Mayor Hal Dally and Rep. Bruce Williamson were among the many who helped make the library expansion possible and participated in the ceremony.

Readers rejoice. The W.H. Stanton Library in Social Circle is getting an expansion and a facelift.

The project, years in the making, kicked off on Friday with a groundbreaking ceremony attended by leaders from around the area.

The construction will close the building until August 2019, as the library adds a new, 4,800 square foot wing and remodels much of the interior. The project will cost $2.6 million, with money coming from the state, Special Local Option Sales Tax and the Uncle Remus library system.

The group applauded the coordination between state and local leaders who recognized the importance of libraries as community hubs and worked to scrape the money together from a variety of sources to fund the expansion.

Dally spoke briefly about the future for the W.H. Stanton Library.

“We don’t get to build things around Social Circle too much, so we want to do it right when we can,” he said.

The new wing, which will house a new children and youth section, will mirror the existing wing of the library. Main stacks will continue to be in the atrium by the entrance, but will be lit largely by natural light, thanks to the addition of a copula atop the building.

Bork said the design will incorporate a coffee-house feel, with muted natural colors, computer islands and comfy chairs. The kid’s wing will connect with an outdoor garden and use more bold colors.

Another feature will be self check-out kiosks, rather than a main librarian’s desk. The plan will be to start with a desk, and then gradually phase it out to the kiosk model as patrons grow more accustomed to the change.

Librarians, instead of being bound to a desk, will patrol the building with rolling carts.

While construction is underway, the library will be temporarily moved to the Blue Willow village.

The event concluded with around 20 people who were all instrumental in making the renovation happen tossing a ceremonial shovel full of dirt.

Walker, the state’s librarian, said breaking ground on new libraries was her favorite part of the job.

“These are the happiest days,” she said.