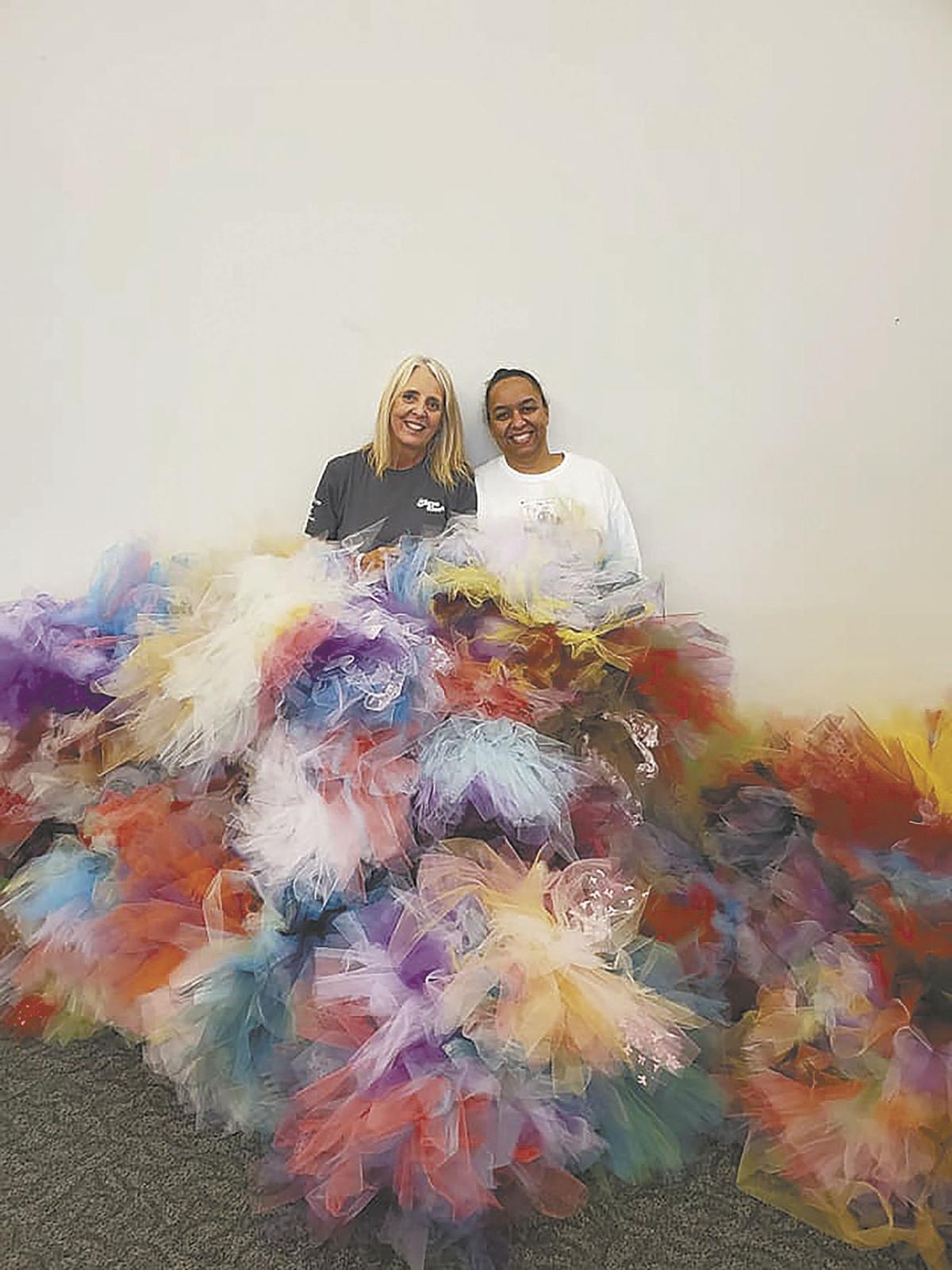 Barbara Mock, left, founder of Tutu Capers, and Ife Williams, the director of the Hudgens Center for the Arts, with a pile of tutus they helped make. 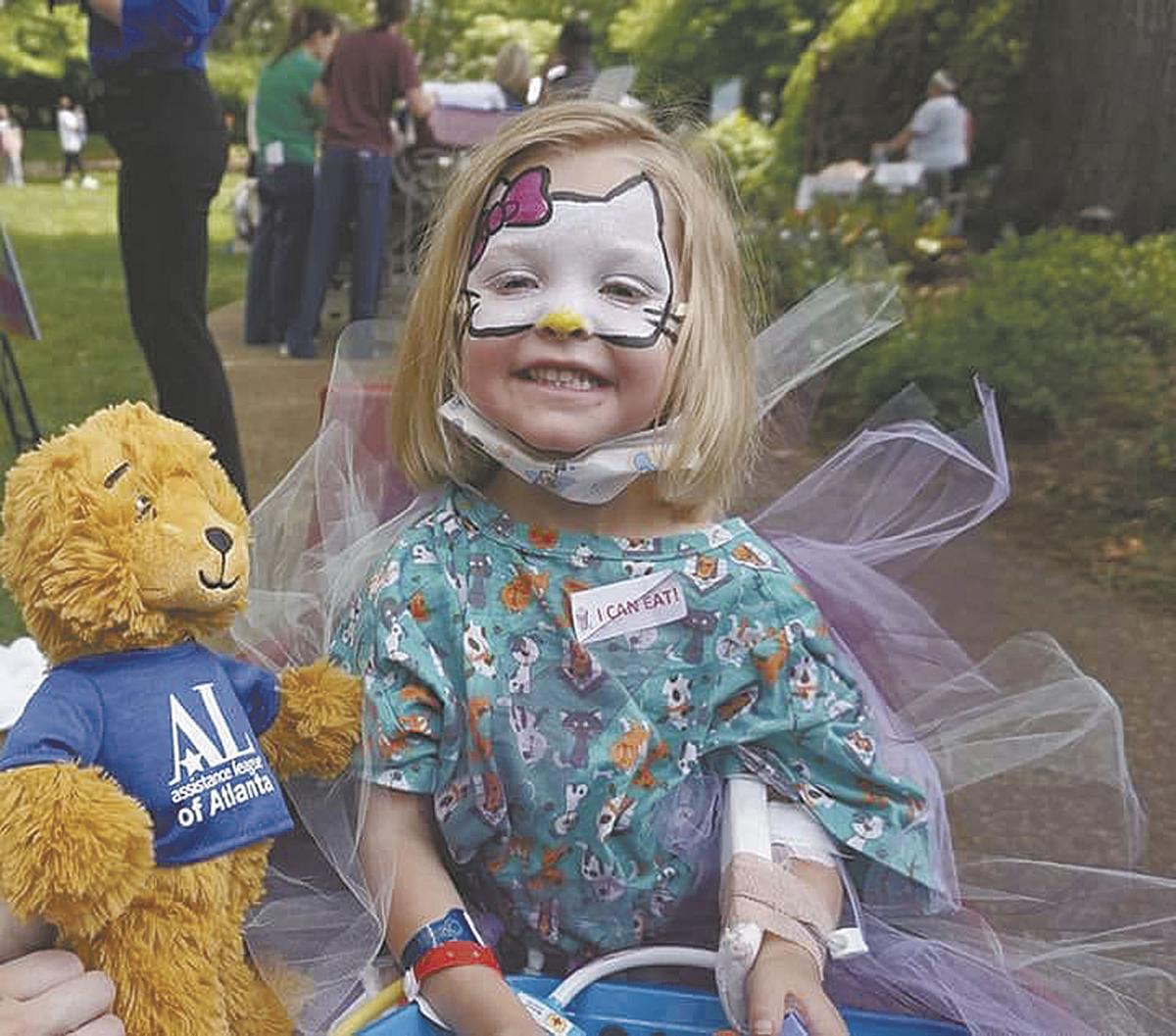 One of the thousands of kids who has received a tutu or cape from Tutu Capers.

Barbara Mock, left, founder of Tutu Capers, and Ife Williams, the director of the Hudgens Center for the Arts, with a pile of tutus they helped make.

One of the thousands of kids who has received a tutu or cape from Tutu Capers.

Last weekend, about 100 volunteers holed up in the Hudgens Center for the Arts in Duluth to stitch together superhero capes and tutus.

These whimsical garments were destined for children’s hospitals around the East Georgia region, where they would brighten the days of kids fighting for their lives.

It’s a project called Tutu Capers that was founded by Barbara Mock, a Walton County resident.

In its eight-year lifespan, Tutu Capers has made and distributed 15,000 tutus and capes to sick kids.

“You really can’t wear a tutu without smiling. There’s just something about a big ball of puffiness,” Mock said.

“And the superhero capes are the same way. They give them super powers. Kids need to be kids, and when they’re in the hospital, they kind of lose that ... This gives them that little bit of whimsy they need.”

Mock was just the person to start Tutu Capers.

Her mother died of breast cancer in 2000, and her son had open-heart surgery at age 11. So she was no stranger to the struggles that go on in any hospital, much less children’s hospitals.

She’d gotten involved in raising money to fight cancer after her mother’s death, and one day, in 2011, her husband Bob saw a story about a Florida charity called Emmy’s Heart on the news. It did what Tutu Capers would one day do: make tutus and capes for sick kids.

He called her into the room.

It just so happened that Mock had been making tutus for decades. She was a professional ballet costume designer for most of her life, fashioning outfits for dancers at Gwinnett Ballet, Alpharetta Ballet, and other companies.

When she saw the story about Emmy’s Heart, she just knew.

“The next day we started Tutu Capers. And that was eight years ago.”

Mock had all the materials to make the outfits right away. She called her friends over and they made a few dozen and then brought them to Egleston Hospital, a part of Children’s Healthcare of Atlanta, where many kids in the southeast with serious life threatening conditions end up.

“Immediately the people from Scottish Rite (another hospital under the CHOA umbrella) were like ‘Hey we want in too,’” Mock said.

“Now we deliver to many more hospitals and we make huge amounts of tutus and capes.”

Volunteers, from high school Beta Clubs, to football teams, to Georgia Tech sororities, to Mock’s friends, have driven the effort. They make and give away tutus and capes every month. Last month, they delivered 500.

At Hudgens last Saturday, they made 254.

The outfits come in all shapes, sizes and colors. The smallest end up in neonatal intensive care units. Others end up in safe rooms of juvenile courts, on the backs of kids who are being taken away from their parents. Still more find their way to kids battling diseases with scary names and cloudy futures.

“Unless you have spent time in a children’s hospital, you have no idea how hard it is...Just a simple thing like bringing a tutu or a cape into the room. It’s just such a positive thing,” Mock said.

She can’t deliver them herself, with all the rules hospitals have about privacy. So she and her team usually just drop them off to the nurses, who then distribute them.

Even if she could personally deliver every outfit, Mock isn’t sure she’d want to. It’d just be too hard.

But thanks and tales of tragedy and joy sometimes trickle back to her.

“I’ve heard all kinds of stores from parents that I can’t even talk about, abut what getting a cape or a tutu meant to them,” she said.

There are adopted kids who wear their capes and tutus the first time they walk into their new homes. There are many kids who fall asleep in their hospital beds, IV and chemo tubes running every which way, wearing a tutu. One boy, Mock said, was buried in his cape.

“It’s just overwhelming and I’m doing what I can to bring some happiness,” she said.

After her last delivery to Egleston, she got an email from a father.

“I was the gentleman you seen in the lobby yesterday,” it read.

“I really appreciate your generosity of the Batman Superman cape you made. My son loves it, heck he slept in it. I just wanted to let you know. And I pray that you keep doing the Lord’s work passing out smiles wherever you go.”