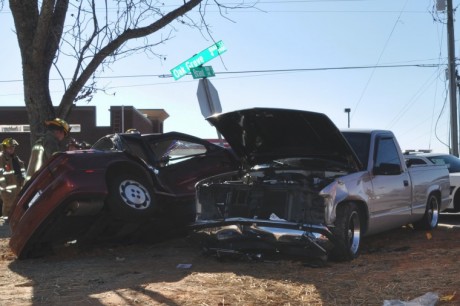 The 18-year-old driver of the vehicle was charged with failure to yield in this wreck Thursday that sent he and his 16-year-old brother to the hospital. 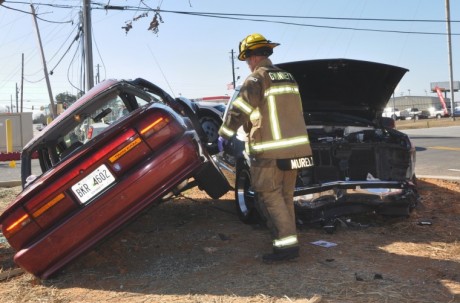 Two teen brothers were injured in a wreck Thursday at the intersection of Brand and Oak Grove roads in Loganville.
1 of 2

The 18-year-old driver of the vehicle was charged with failure to yield in this wreck Thursday that sent he and his 16-year-old brother to the hospital.

Two teen brothers were injured in a wreck Thursday at the intersection of Brand and Oak Grove roads in Loganville.

LOGANVILLE — An accident at the intersection of Brand and Oak Grove roads Thursday in Loganville resulted in two teen brothers being transported to Gwinnett Medical Center, one in a serious condition, according to Loganville police.

Lt. John Fain of the Loganville Police Department said the accident happened at about 1 p.m. when the vehicle driven by an 18-year-old turned in front of a pickup truck at the intersection.

"The traffic was backed up and someone motioned for him to turn," Fain said. "He did, into the path of the truck."

The 18-year-old driver was charged with failure to yield. Officials have not released the names at this time.

I hope these kids are okay. To the State of GA, please move the driving age up! Please implement a driving test administered by a qualified instructor. Please provide divers education in H.S. or require xhours of instruction before issuing the liscense.
Age / experience / education would have helped this young man to ignore the other driver waving him on. Going out onto GA roads is a big risk w/ all the unqualified young drivers who firmly believe they are invincible.

Teen driver are required under joshua's law to have driver education with x amount of hours of driving experiance before they can even get their license.

Joshua's law requires 16 year old to have a number of hours taken in driver's ed. Or the can choose to wait till the 17 and go get the license straight, That what i had to do, and i honestly it to me it help out another year with my leaners. But here in this story it was an 18 year old driving.

I hope the teens are OK. Several factors contributed to this accident - age & inexperience of driver and a dangerous intersection that needs attention (one of several in Loganville) before a fatality occurs. Also, while it was nice for a driver to wave the teens forward it gave the false impression that the lane was clear.