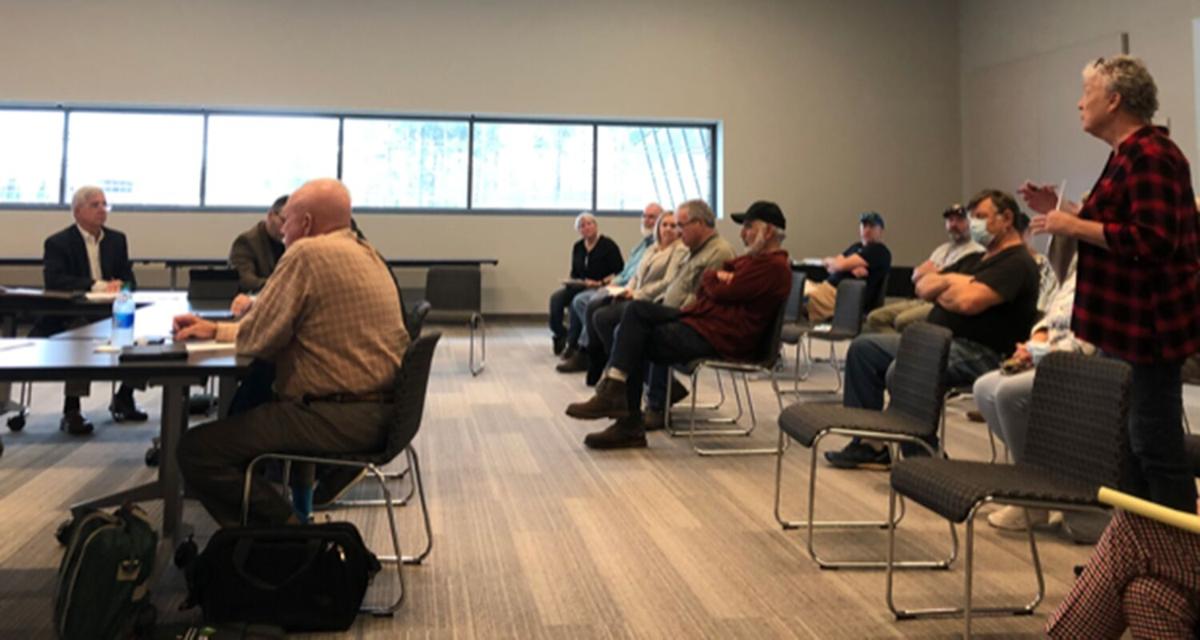 Jerry Silvio, left, the chairman of the Joint Development Authority, listens to a citizen during the JDA meeting Tuesday afternoon, Dec. 28, 2021, in Social Circle, Ga. 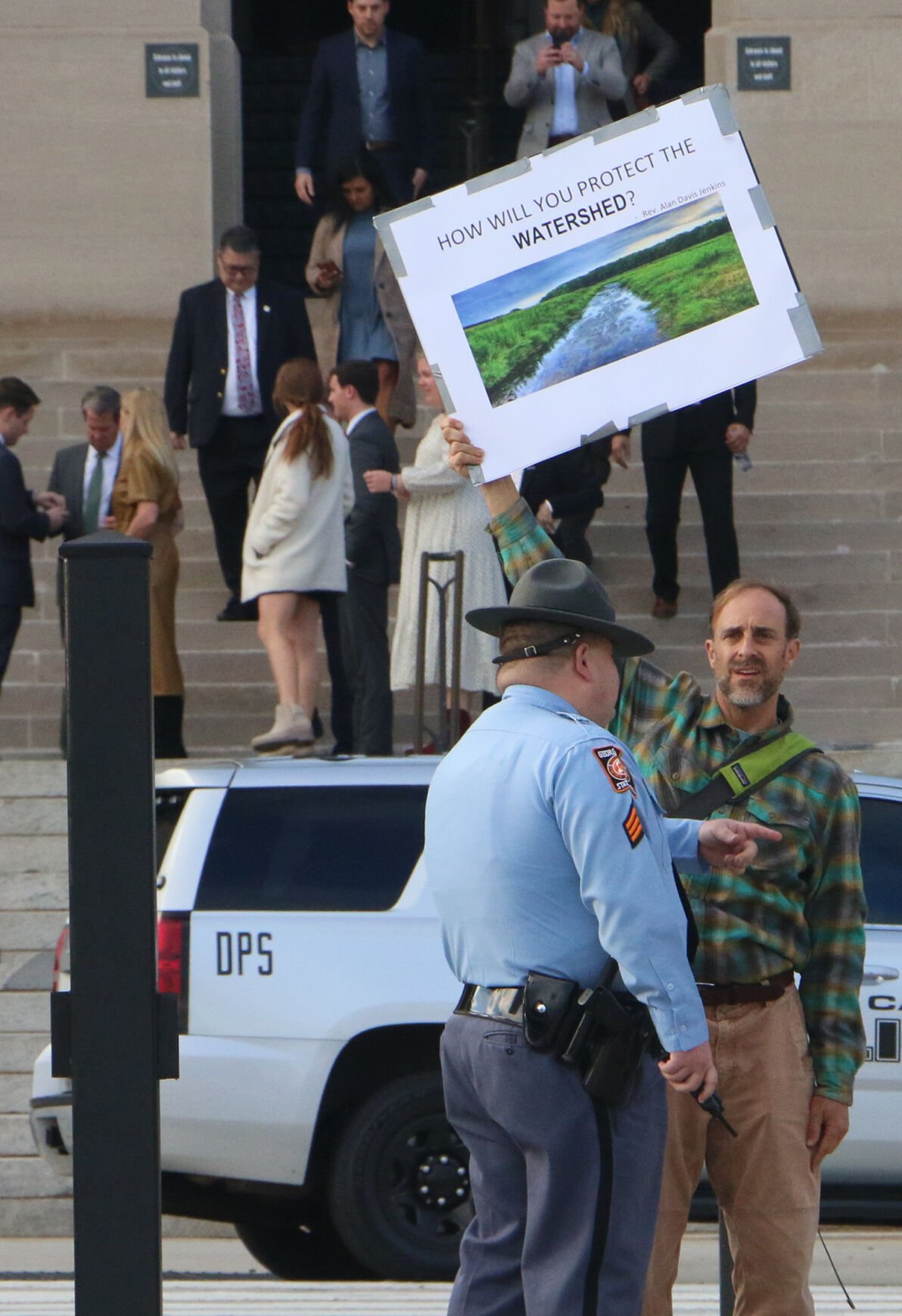 A state trooper directs the lone protestor of Rivian Inc.'s announcement of its intention to come to Social Circle at a news conference Thursday afternoon, Dec. 16, 2021, at the state Capitol in Atlanta.

“That ship has sailed,” Shane Short, the executive director of the Development Authority of Walton County, said.

Short was responding to questions and comments from residents of Walton and Morgan counties living near the site of the planned electric vehicle production and research facility during a Joint Development Authority meeting Tuesday at the Georgia BioScience Training Center in Stanton Springs business park.

California-based electric vehicle company Rivian announced Dec. 16 it would build its second U.S. production facility on a 2,000-acre site within the Stanton Springs North business park, at the corner of Interstate 20 and U.S. 278.

The site is partly in the Social Circle city limits in the northeast quadrant of the interchange, bordering the Newton County line and covering the southern tip of Walton County and far western Morgan County.

About 10 area residents Tuesday told the Joint Development Authority about what they saw as lack of transparency before the selection of the site and their concerns about the impact on the area’s rural nature.

Some residents also said they had to consult local and regional media about the 7,500-employee project potentially coming rather than hearing it from area governments or development authorities.

Social Circle resident Christine Wertz said she never would have moved to her Darel Drive home adjacent to the site if she had known about Rivian’s plans.

“The lack of transparency is deeply troubling to me and I think to many others,” she said.

James Evans of Social Circle said he worried about the impact of construction on well water that many area residents rely on.

He also said he was unhappy with the timing of Rivian’s announcement near the holidays when residents’ attention may be turned elsewhere.

“It just blindsided everybody,” said Evans, who has lived in the area since 2004.

Joellen Artz of Rutledge lives near the site and said she believed Morgan County would lose “hundreds and hundreds of acres of farmland” for construction of the factory.

She also said Rivian eventually may abandon its factory just as vehicle makers in other states did — including in Normal, Illinois, where Rivian opened its initial factory into a former Toyota facility.

Short said the Joint Development Authority of Jasper, Morgan, Newton and Walton Counties planned to host town hall meetings for area residents in the Rutledge area and for those living on roads around the site. It planned to advertise them on the JDA’s website and social media platforms.

He said Rivian also planned a meeting with residents and work with them on addressing any concerns.

Short, who is one of two industrial recruiters for the JDA, said Rivian approached the Georgia Department of Economic Development about the site and state officials turned responsibility for the project over to the JDA.

Development agencies and recruiters want to announce their successes and have no “intent” to keep such large projects secret, he said.

Short said companies require the agreements for such reasons as keeping the information from competitors or stock trading issues, he said.

“They control the timing very carefully,” Short said. “There’s still some things (about Rivian) we can’t talk about.”

However, he added that “the company’s coming.”

“You can’t stop that, but they’re open to listening to your concerns,”Short said.

Rivian planned to start site work for construction of its facility in mid-2022 and begin production by 2024.

Short said the government would not use its power of eminent domain to essentially take land.

“Every property owner gave us their price,” Short said.

State leaders researching the Kia plant in West Point, Georgia, correctly found most of its workers likely would choose to live away from the immediate area of the plant site, Short said.

He predicted that same scenario will repeat itself for the Rivian plant’s 7,500 workers because of the lack of available housing around the site, lack of infrastructure plans by area governments, and few shopping opportunities nearby.

“We have had zero discussions about apartments,” Short said, addressing another resident’s concerns.

Local leaders control how residential and commercial growth proceeds in any area of Georgia, he added.

Rutledge resident Sim Sergiadis predicted his neighbors would continue to make their feelings known loudly and publicly in the future about their opposition to the project.

The unbridled arrogance demonstrated by Shane Short in these comments, and by the entire JDA in general, is staggering. They should all be ashamed of how this has been handled, and how they continue to act as a paternalistic secret government agency.