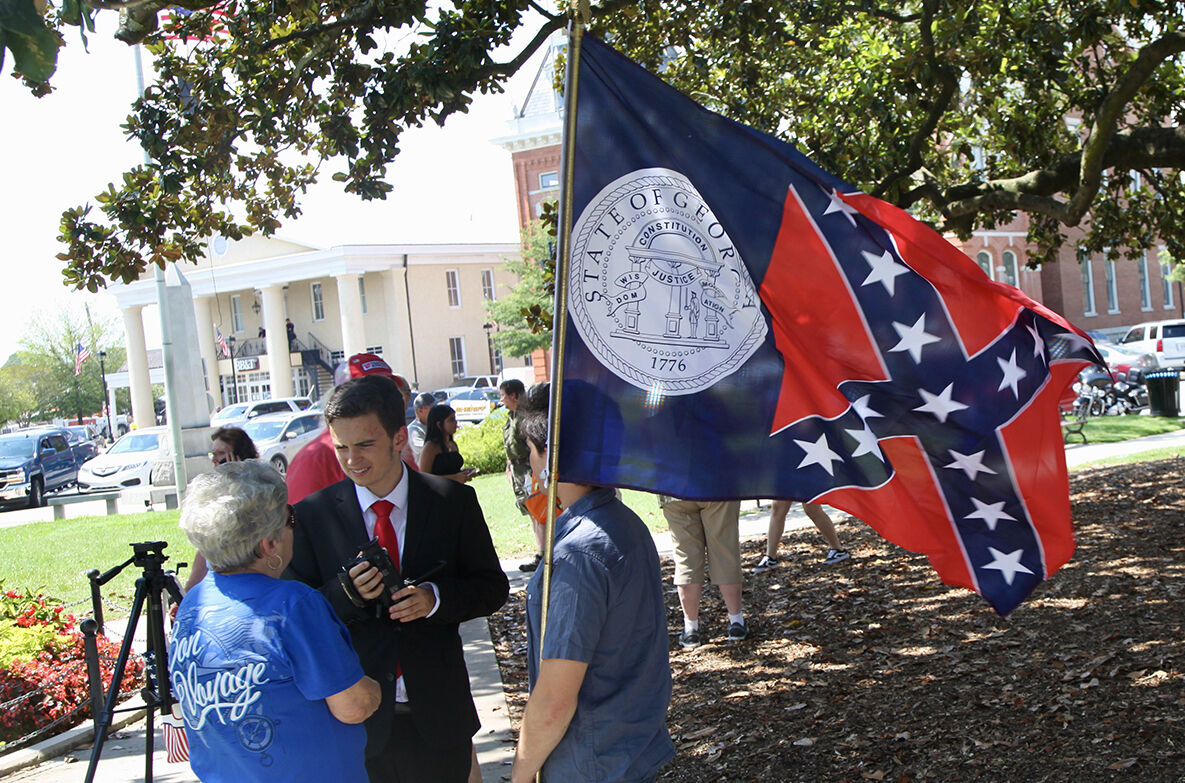 A Save Our Statue rally drew dozens to the downtown Square in Covington, Ga., on July 19, 2020, days after the Newton County Board of Commissioners voted 3-2 to remove a Confederate monument. 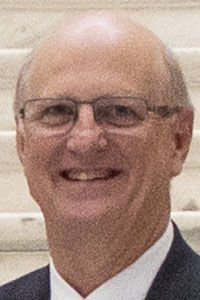 John M. Ott became a judge in the Superior Court of the Alcovy Judicial Circuit in 1990 and became the chief judge of the circuit in 2005.

COVINGTON, Ga. — State Court of Appeals judges during a Tuesday hearing challenged attorneys about Georgia governments’ protections from lawsuits and if damages should be awarded to those trying to stop a future event.

A three-judge panel questioned attorneys during the hearing on an appeal of a Newton County judge’s September 2020 order that effectively denied a challenge to the county government’s planned removal of a Confederate memorial statue from the Covington Square.

Attorneys representing the Newton County government, and the Sons of Confederate Veterans and Newton resident Tiffany Humphries who both oppose removal, participated in the hearing.

The case stemmed from the Newton County Board of Commissioners’ July 14, 2020, decision on a 3-2 vote to remove the 115-year-old statue from a county-owned park in the middle of the Square.

In anticipation of the vote, Humphries filed a legal action in Newton County Superior Court on July 13 to halt the removal and seek damages for injuries she would receive from its removal.

The SCV filed a similar action soon after the vote and Newton County Superior Court Chief Judge John Ott ordered the two cases be considered together.

Issues raised by Ott in a July 20 hearing included questions about if a state law created in 2019 removed the county government’s constitutional guarantee of sovereign immunity protecting it from legal actions.

Another issue raised was if Humphries and the SCV legally were entitled to stop the statue’s removal and collect damages if they were not physically or financially injured by the action.

The hearing led to Ott’s September ruling that neither were eligible to stop the removal or collect damages because of the state Constitution guarantee of immunity to lawsuits and the two groups were not be injured in a “concrete” way.

Before Tuesday’s hearing — conducted virtually on the Zoom digital platform — the three appeals court judges already had seen the issue discussed in filings by all the attorneys in prior months.

SCV attorney Kyle King and Humphries’ attorney, Walker Chandler, argued the government was not immune in all cases because the Supreme Court had ruled in a past case individual government officials could be sued for their illegal actions.

King said one issue judges raised on Tuesday that was not addressed in the July 20 Superior Court hearing was the question of “ripeness.”

The doctrine of “ripeness” in the U.S. Constitution says courts cannot rule on a possible injury because it is not yet an “actual controversy” and considered “ripe” for judicial review until the injury occurs.

State law provides for damages to be assessed if an injury was proven from a statue’s removal. The judges on Tuesday asked “was it premature to bring this action before the monument was removed and before damages could be assessed.”

“That may be an issue that (appeals court judges) may choose to emphasize,” King said.

Part of the state law protecting monuments refers to damages that include attorneys’ fees and court costs — both of which “my clients have incurred” during the process of filing and defending an injunction, King said.

“We think that just because they haven’t suffered all of the damages that they could suffer doesn’t mean there aren’t damages provided for in the statute,” he said.

Patrick Jaugstetter, representing Newton County, told the judges Tuesday the Court of Appeals and the Georgia Supreme Court in past cases “consistently” ruled sovereign immunity is given to county governments in Georgia.

“It is waived only by an act of the General Assembly specifically waiving that sovereign immunity, or implicitly waiving when there is no other way to interpret a statute,” he said.

Jaugstetter said the two groups opposing the removal failed to establish that state law gave a waiver of the county’s immunity.

They also had not shown they had legal standing, or if it was an “actual controversy” because “the monument’s still there.”

Legal standing would require they show they were injured in a “concrete” way, such as impairing an ability to operate, rather than in a “psychic” way such as harm to a belief in a political cause or religion, he said.

“These plaintiffs in this case have not even bought themselves an appropriate ticket to the courthouse,” Jaugstetter said.

Although Georgia voters approved amending the state Constitution in November 2020 to remove sovereign immunity in many cases from governments, it only applied to actions taken after Jan. 1 of this year.

Jaugstetter said even if the 2020 amendment had removed the county’s immunity protection, those opposing its removal still would have to prove they had legal “standing” to file an injunction and receive damages.

He said the remedies in state law for those who could prove they were injured “are dependent on the removal, loss, damage, destruction or defacement of the Confederate monument or a protected monument.”

“The monument on the Covington Square is in the exact same condition as it was a year ago, two years ago, 10 years ago,” he said.

King said after the hearing he typically felt “pleased” about a case when judges are familiar with “the facts and the briefs” filed in a case.

“They asked very engaging questions — things that indicated that they understood the issues that were there. For the most part, we were able to address the questions,” King said.

He predicted that the Court of Appeals judges would rule later this summer, in part because of the delays in state courts’ operations because of the pandemic.

The deadline for ruling on the case is Nov. 3, 2021, which is the date the state Constitution requires for cases considered in its current April term.