Darin Mitchell of Rutledge takes a photo of a site plan for the Rivian project on display at Social Circle Middle School gym Tuesday night, Jan. 11, 2022.

From left, Hank Evans of the Georgia Department of Economic Development, and Serra Hall and Shane Short, both of the Joint Development Authority, lead the community meeting Tuesday night, Jan. 11, 2022, at Social Circle Middle School. 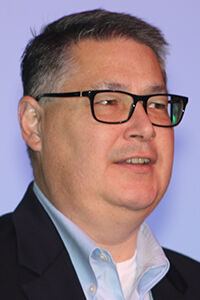 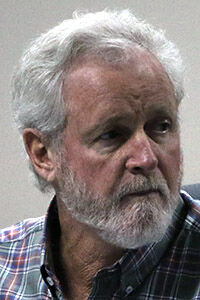 Alan Verner is the chairman of the Joint Development Authority of Jasper, Morgan, Newton and Walton Counties.

SOCIAL CIRCLE, Ga. — Residents of the area surrounding a planned electric vehicle manufacturing complex gave local officials a different reception than the glowing one from state leaders during last month’s announcement of it coming to Social Circle.

About 150 area residents, most of whom appeared to be from Morgan County, filled one side of the Social Circle Middle School gym and peppered industrial recruiters with questions for about 90 minutes Tuesday night about Rivian Inc.’s choice of the site in the northeast corner of the Interstate 20 exit for Stanton Springs Parkway (U.S. 278).

Shane Short and Serra Hall, who lead recruitment efforts for the four-county Joint Development Authority, and Hank Evans of the Georgia Department of Economic Development led the community meeting.

Attendees asked JDA representatives about issues ranging from the potential use of eminent domain powers to secure land for the facility, to its environmental impacts on the area and transparency in the process of choosing the 2,000-acre site.

The site straddles the line between Walton and Morgan counties. Its western half is in the city of Social Circle and eastern half in unincorporated Morgan.

Construction is expected to begin later this year, with the initial phase completed by 2024 and completion by 2026.

He said the state then gave responsibility for developing the land and working with landowners to the JDA — which bought most of the site in May 2021 and named it Stanton Springs North.

He said JDA members and others involved in the negotiations were required to sign nondisclosure agreements after Rivian agreed to locate on the site and bring 7,500 jobs to Georgia.

“If we don’t sign that nondisclosure agreement (then) game over,” Short said. “I’m not saying it’s right or wrong — that’s the process.”

He clarified for one audience member that a prior public comment attributed to him about the project being a “done deal” referred to the state government’s and Rivian’s selection of the site.

However, he noted that any objections meant to slow or stop construction should concern legal issues with it and “not just because someone does not like it.”

“It’s going to be hard to stop,” Short said.

Preliminary site plans displayed at the event showed a multi-building campus with almost 16 million square feet under roof, most of which was in six main buildings.

One building on the Rivian site plan was a three-story, 2.5 million-square-foot research and development building, while other main buildings ranged from 4.3 million to 1.6 million square feet.

Short told the audience the plant's 7,500 employees would make at least $56,000 each to start. Most workers likely would commute to the plant and not live in the immediate area, he said.

He said the Georgia Department of Transportation is planning construction of a new interchange at Old Mill Road for the plant and improvements to the existing I-20 exit to U.S. 278. It also is planning a widening of 278 that includes removal of a dangerous fork in the road for Willow Springs Church Road, he said,

Construction of a frontage road alongside I-20 and connecting U.S. 278 with Old Mill Road also is planned.

Short said the JDA, which is listed as the developer, does not have power of eminent domain. It is negotiating with land owners on both the Walton County and Morgan County sides of the site and some have already sold their land “willingly,” he said

“I assure you those receiving those payments are very well compensated,” Short said.

However, he added GDOT has the power of eminent domain if it decides to use it for road improvements.

He told the mostly skeptical audience one of the property owners the JDA is negotiating with is the JDA’s former longtime chairman, Alan Verner of Morgan County.

Short said — to some laughter from audience members — that Verner “was asked to leave the room” when the JDA discussed the project when he served as chairman before his retirement in August.

“He was not part of the discussions,” Short said.

“I would challenge anyone in the room for any single bit of impropriety,” he said. “We have an attorney at our meetings.

Newton County Water & Sewerage Authority will provide water and sewer service. Studies are underway on underground water sources and other environmental concerns — including how to protect wetlands — and will be made public once completed, he said.

Short admitted there were no assurances the company would not abandon the facility after it is built if business conditions change — as in Normal, Illinois, where Rivian built its first production facility inside a former Mitsubishi plant.

“There are no assurances in the business world,” Short said. ”We do redevelopment all the time.”

Short and Hall also said Rivian Inc. officials would be hosting a similar meeting about the company’s plans within weeks.

Social Circle Mayor David Keener and JDA Chairman Jerry Silvio were among elected and appointed officials who remained afterward to talk with attendees.

Miles and Vicky Burdette, both of Rutledge, told The Covington News they were disappointed because they closed on a house in Rutledge on the same day Gov. Brian Kemp announced the Rivian plant Dec. 16. They had moved from Conyers to be nearer their daughter in Social Circle, they said.

“I think it’s going to ruin the county,” Vicky said.

“This meeting was useless,” Miles said. “There are so many other places that would want this.”

David Schaffer of Bostwick said the plant will “destroy the character” of the primarily rural area because of the demands of 7,500 employees for services like fast-food restaurants and retail stores.

Darin Mitchell of Rutledge said he did not “want it in my backyard” as he checked out the site plan of the 2,000-acre facility.

Another man, whose property adjoins the site, said he had recently installed a swimming pool.

“They didn’t answer any questions,” said the man, who did not want to be identified.

The Rev. Alan Davis Jenkins, whose family has lived near the site for generations, said it was a “travesty of justice that these meetings weren’t held” before the project was announced so the community could have more input.

He said Rivian needed to take the time to talk with area residents if it wants them to buy in to the plan before construction begins later this year.

“If Rivian wants to get off on the right foot, (it) needs to slow down,” Jenkins said.