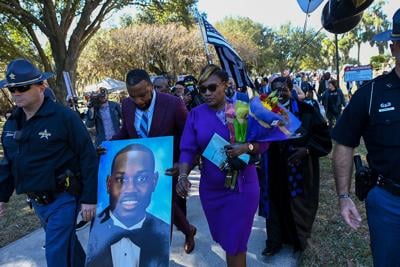 BRUNSWICK, Ga. — The three men who chased and killed Ahmaud Arbery in coastal Georgia last year were convicted of murder Wednesday, in a case that once went 74 days without arrests and that many saw as a test of racial bias in the justice system.

The decision was read to the court shortly after 1:30 p.m., after less than two days of deliberations. Members of Arbery’s family cried out with joy.

Travis McMichael, his father, Greg McMichael, and their neighbor William “Roddie” Bryan were all convicted of felony murder in the shooting of Arbery, a 25-year-old Black man — meaning they committed felonies that caused his death. They were also found guilty of aggravated assault, false imprisonment and attempt to falsely imprison. But Bryan and the elder McMichael were acquitted of malice murder, which involves intent to kill. Each defendant now faces a potential penalty of life in prison without parole.

A leaked video of the Feb. 23, 2020, shooting thrust the case into the national spotlight, just weeks before the murder of George Floyd by a white police officer in Minneapolis ignited mass protests against police brutality and racism. Arbery’s killing became a rallying point for the Black Lives Matter movement, as protesters said Arbery was racially profiled while jogging and accused authorities of brushing his death aside.

That national conversation hung over the trial that stretched more than five weeks as lawyers fought over the courtroom presence of Black civil rights leaders and a nearly all-white jury, with the exception of one Black man.

The trial also took place in the shadow of the highly publicized murder trial of Kyle Rittenhouse. The white teenager was acquitted last week after his defense successfully argued that he shot three people — killing two — in self-defense, after driving to Kenosha, Wisconsin, to help protect businesses and property when protests over the police shooting of a Black man turned violent.

Prosecutors portrayed the Georgia defendants as dangerous vigilantes who cornered an unarmed man with their pickup trucks in suburban Satilla Shores. “This isn’t the Wild West,” prosecutor Linda Dunikoski told jurors, saying that the accused jumped to assumptions about a “Black man running down the street.” On Wednesday she said that “the jury system works in this country.”

Lawyers for the defendants said the men were attempting a legitimate citizen’s arrest that turned deadly, and argued that race played no role. The younger McMichael testified last week that he felt compelled to shoot in self-defense when Arbery ran at him, struck him and grabbed his shotgun.

Arbery died because he “chose to fight,” defense lawyer Laura Hogue said in her closing, which the prosecution called “offensive.”

Dozens of Brunswick residents rushed to the courthouse to celebrate after the verdict. Many were Black fathers who brought their sons.

“We feel like justice was served and it was a relief to know the system actually worked in this case and they didn’t find a loophole,” said Shawn Golden, 48, who was with his 10-year-old son.

“Bringing him face-to-face to what is going on around us, this is special and something he will remember for the rest of his life,” Golden said.

Ruby Arbery, Ahmaud’s aunt, said she “felt something lift off her.”

“All the pain, all the hurt, it lifted because I knew we got justice,” said Arbery, 53. “We finally got justice for my nephew.”

The uproar over Arbery’s killing eventually spurred changes to Georgia law and a criminal indictment for the first prosecutor to touch the case. The verdict drew immediate reactions Wednesday from lawmakers who praised the ruling but also called for criminal justice reform and said there was more work to be done.

Arbery’s family once fought for legal consequences of any kind.

“Back in 2020, I never thought this day would come,” Arbery’s mother, Wanda Cooper-Jones, said outside the courthouse Wednesday. Now, she said, her son could rest in peace.

The indicted prosecutor, former Brunswick Judicial Circuit District Attorney Jackie Johnson, quickly recused herself because Greg McMichael, a former police officer, had recently retired from her office. Johnson, who was voted out of office last fall, was indicted in September on allegations that she showed favor to Greg McMichael and obstructed police by telling them not to arrest Travis McMichael.

A second prosecutor, George Barnhill, had advised police against arrests a day after the shooting. Barnhill, who remains in office, defended the McMichaels and Bryan even as he eventually recused himself as well, asserting that Arbery was caught “burglarizing” and had attacked Travis McMichael.

After the May 2020 leak of the video — which had been in police possession for months — and the public outcry, the Georgia Bureau of Investigation took over the case and announced arrests.

The McMichaels said they recognized Arbery on Feb. 23, 2020, as the man who entered an under-construction home several times in the months leading up the shooting, often in the evening — incidents captured on surveillance camera. Travis McMichael said he had encountered Arbery at the property earlier that month and reported the incident to police.

Video footage did not show Arbery taking anything from the property, and police told that to the McMichaels. No stolen items were found on his body. But Travis McMichael testified that he suspected Arbery of theft after hearing that things went missing from the property. Arbery had just left the under-construction home on Feb. 23 when Greg McMichael said he spotted the 25-year-old running past his house.

Bryan’s stated reason for joining the McMichaels as they chased Arbery past his home was less clear. He was not aware of the surveillance video, according to testimony, and Travis McMichael told the jury he did not know Bryan as he pushed back against allegations of a concerted effort.

“I figured he had done something wrong,” Bryan told authorities last year, saying he sought to photograph Arbery. “I didn’t know for sure.” Bryan’s lawyer has maintained he was only a witness to the shooting, noting that Bryan did not bring his rifle along.

Georgia’s citizen’s arrest statute at the time required “immediate knowledge” of a crime or “reasonable and probable grounds of suspicion” of someone fleeing a felony offense. The law was significantly narrowed in the wake of Arbery’s death, a testament to the bipartisan backlash the killing inspired. Arbery’s case also led Georgia legislators to pass a hate crimes law.

Supporters of Arbery’s family expressed confidence throughout the trial that the jury would convict, and Arbery’s mother said last week that Bryan’s lawyer had sought a last-minute plea deal that prosecutors turned down. Bryan’s lawyer denied doing so. Throughout the trial, defense attorneys seemed to stake out potential arguments for appeal as they said gallery outbursts, courtroom guests and outside demonstrators had compromised their clients’ right to a fair trial, potentially influencing jurors.

Frank Hogue, who represents Greg McMichael, said they would appeal after sentencing. Speaking to Greg McMichael’s tearful wife after the verdict as the courtroom emptied, defense lawyer Laura Hogue said she was “floored with a capital F.”

Bryan’s cellphone video is central to the case. It shows Arbery running down the road ahead of Bryan, toward the McMichaels and their parked truck. Arbery passes the vehicle and then turns and runs toward Travis McMichael, who is holding a shotgun.

Prosecutor Linda Dunikoski last week zeroed in on the moment when Travis McMichael trained his gun on Arbery. At that point, the defendant confirmed, Arbery had not made any verbal threats or shown any weapon. He did not say a word the whole encounter, Travis McMichael testified.

“All he’s done is run away from you. … And you pulled out a shotgun and pointed it at him,” the prosecutor said.

Travis McMichael said he pointed the gun to “deter” Arbery from continuing toward him, citing his Coast Guard training on use of force and deescalation tactics.

In the video, the truck obscures the men’s movements as the first shot fires. “I knew that he was on me,” Travis McMichael told the jury. “I knew that I was losing this.”

Experts from the GBI bolstered McMichael’s account when they testified that Arbery was shot at “contact or near-contact” range. But Dunikoski noted that Travis McMichael told police shortly after the shooting that he was not sure whether Arbery actually grabbed the weapon.

The defendant also did not tell police about Arbery allegedly “attacking” Bryan’s truck, she said, or taking off running when told the police were coming. Those were both key moments that Travis McMichael described for the jury as raising his alarms.

“Use your common sense … do you think all this was completely made up for trial?” Dunikoski told jurors.

Rittenhouse’s acquittal only added to the weight many placed on Arbery’s case. Prosecutors had called Rittenhouse a vigilante with an AR-15-style rifle who instigated the situation.

Prosecutors in Arbery’s case have argued that if anyone had a right to self-defense, it was Arbery — chased for five minutes and threatened by strangers. Some warned that acquittal for the man who shot Arbery would harden the view that there are two justice systems in America.

The nearly all-white jury empaneled raised concerns before testimony even began. Already under the microscope, the jury for Arbery’s killing drew even more scrutiny this month as the defense struck 11 out of 12 Black jurors from the final group the judge found qualified to serve.

Jason Lewis, 38, who was raised in Brunswick, said that seeing 11 white jurors voted to convict the white defendants helps overcome the injustices that Black residents have experienced here for generations. “After the Rittenhouse verdict, I was discouraged and I was afraid,” Lewis said. “This verdict by 11 white people reaffirms that justice in America is still real.”

Lawyers for Arbery’s family said Wednesday that the jury’s verdict will reverberate around the country.

“This is a very consequential day, not just for Ahmaud Arbery but for families all over America,” said Ben Crump, a prominent civil rights lawyer who represents the family. “We have to show that America must be better than what we saw in that video.”

The Washington Post's Eugene Robinson and Tim Bella contributed to this report. Knowles reported from Washington.

Officials weigh in on the conviction of three men of murder in the shooting death of Ahmaud Arbery.