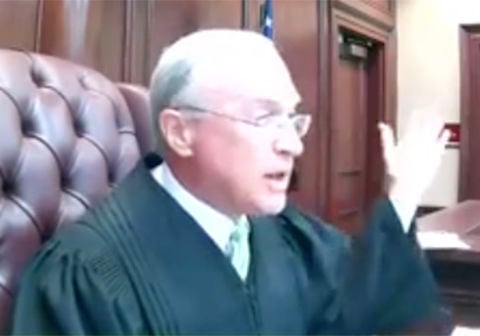 Senior Judge Samuel D. Ozburn presides over a sentencing hearing in Walton County Superior Court on Thursday morning, June 18, 2020. The hearing was shown on video due to social distancing rules. 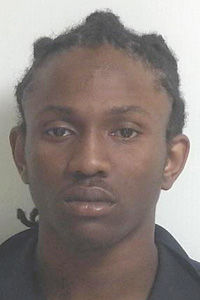 MONROE, Ga. — The judge saw a “very troubled young man” in the 16-year-old who killed two men and stole the dirt bike he lured them here to sell.

That young man, Kinterie Kiatis Durden, will spend the rest of his life in prison.

Senior Judge Samuel D. Ozburn handed down two sentences of life without parole on Thursday to Durden on malice murder charges from 2017.

Durden will turn 20 on Tuesday. He was convicted last autumn of killing Davoddren “Smack” Harris and Cortez White Sr. as a 16-year-old.

Durden arranged a Facebook Marketplace transaction to buy a dirt bike, and the men came from Meriwether County to sell it.

“He arranged for the victims to bring it to Social Circle and he had expressed his intention to buy it,” Ozburn said. “Obviously there was the driver and the passenger in the car, both of whom were shot.”

Ozburn noted Durden never intended to buy the bike, and that the jury rejected claims that Durden shot them in self-defense.

Ozburn said he spent numerous hours studying evaluations of Durden’s behavior and his school records, particularly from the 2013-14 and 2014-15 school years. The judge found 88 separate acts of discipline against Durden.

“This took some time to go through,” Ozburn said.

He also found “very serious offenses” in Durden’s Juvenile Court records, including breaking a student’s jaw and thefts of a gun and vehicle.

Defense attorney Dwight L. Thomas of Atlanta had asked Ozburn in the May 28 sentencing hearing to consider the minimum of life sentences, running concurrently, with the chance of parole.

Layla Zon, then the district attorney, argued Durden’s criminal past called for two concurrent sentences of life without parole.

Ozburn presided over the trial and sentencing hearing, and said his study of the case — including a psychiatric evaluation of Durden — left him “deeply concerned” about the defendant.

“I’ve done all within my power,” Ozburn said. “I’ve prayed on this. I’ve spent a lot of time on this. This is a difficult thing when you’re dealing with a younger person who has committed acts — and he was found guilty of everything. There were guilty verdicts on all 12 counts.

“I’m finding that he is irreparably corrupt. I just can’t see any indication by him — even after the trial in jail, he’s continuing to defy the superior people around him, the deputies, causing disruption, flooding jails, making sexual comments to female deputies and so forth.

“It continued even after he was found guilty.”

Ozburn gave Durden the life sentences without parole on the two counts of malice murder and by law vacated by the convictions of felony murder.

Durden also received two consecutive five-year sentences for his convictions of possession of a firearm during the commission of a felony, which in itself is a felony.

Thomas, immediately after the sentence was announced, said he planned to file a notice of appeal and stepped away from the case.

The Alcovy Circuit public defender’s office will handle Durden’s request for a new trial after Thursday.