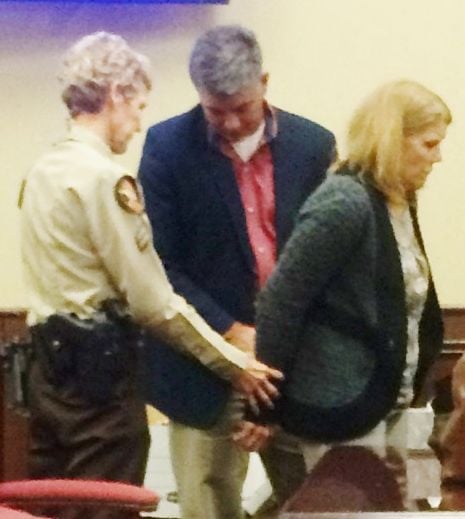 From left, Walton County sheriff's Deputy Anner Pitman and Sheriff Joe Chapman place the handcuffs on Linda Agee after a guilty verdict was read in her murder trial Thursday, June 4, 2015. 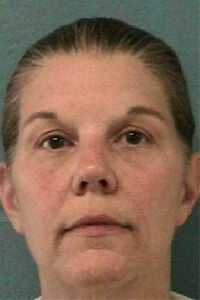 Linda Chapman Agee was convicted of murder in 2015 for the 1992 death of her husband, Randall Peters. The Georgia Supreme Court reversed the conviction on Monday, Aug. 10, 2020. Agee is shown in a photo from the Georgia Department of Corrections, where she was serving a life sentence at Pulaski State Prison.

Agee was found guilty in Walton County Superior Court of killing her husband, Randall Peters, in March 1992, but not indicted until April 2014 on charges of malice aforethought and murder in the commission of a felony (aggravated assault).

The Supreme Court decided Monday that it agrees with Agee’s contention that Judge Horace Johnson erred by allowing hearsay statements of a dead witness.

Agee and Peters lived with their twin daughters in a Walton County neighborhood and she helped him run a produce delivery business. But, their marriage was troubled and Agee was involved in a long-term affair.

On the night of March 19, 1992, Agee dropped her daughters off at the home of Peters’ parents, Horace and Linda Peters, after the girls’ softball practice. Within an hour, Linda Peters answered the doorbell and Agee asked them to check on their son.

Agee said when she came home, she saw a “tall dark figure go across the hall,” heard water running and heard Peters yell, “It’s hot, it’s hot” before she drove to her in-laws’ house for help.

A neighbor went to the home and found Peters lying in the hallway with a “hole in his chest,” and an autopsy revealed that he died of two gunshot wounds. Police found the den and a bedroom ransacked, but other parts of the house untouched. The bathtub contained blood spatters and was full of water, and a wad of cash was lying in front of the home.

Peters’ truck was gone, to be found later that night on the side of a road.

Agee told police hours later that after she dropped off her daughters, she realized she might have left her tennis shoes at Coker Park, so she went to get them from a bleacher in the dugout. She said she got home to find the scene she described to her in-laws.

Court proceedings show other evidence cast doubt on Agee’s statements. One witness, a youth pastor, said he was responsible for closing Coker Park that night and saw Agee leave practice with her daughters, had checked the dugout and never saw Agee return.

Horace Peters testified that he never had conversations with Agee about leaving him the keys to Randall Peters’ truck, even though she told police he had borrowed the keys from her or her husband.

Police also interviewed Jeff Sargent, the man with whom Agee had the affair. He admitted driving by the house Agee and Peters shared at about 10 that night to try and see her.

Sargent also told officers he feared if he told the truth he’d “get life or the electric chair.”

In a second interview, Agee admitted she stopped at a day care to talk to Sargent while on the way to her in-laws’ home to seek help. That day care was less than a quarter-mile from the Monroe Police Department.

At trial, the state presented testimony from Alan Cook, then the district attorney of the Alcovy Judicial Circuit, who testified that the investigation into the case stalled after about a year. He said to try and revive it, Cook’s office petitioned the Superior Court to grant “use and derivative use immunity” to Sargent so he could be compelled to testify before the grand jury without regard to his constitutional privilege against self-incrimination.

The day before the immunity hearing, however, he and Agee married. The Superior Court granted and the Court of Appeals upheld the man’s invocation of the marital privilege.

They remained married when Sargent died in October 2006.

In 2010, the Walton County Sheriff’s Office retained former federal agent Mike Rising as a special deputy to investigate the cold case. After a 22-month investigation, he recommended Agee be prosecuted.

Although Agee didn’t dispute the trial evidence in her appeal, she does claim the Superior Court judge, who died last month, erred by accepting Sargent’s statements to police. She claims that because those statements were “testimonial,” and she didn’t have the opportunity to cross-examine Sargent, the admission violated her Sixth Amendment rights.

Johnson acknowledged Agee’s constitutional right to confrontation, but ruled she forfeited that right through wrongdoing. The court in a ruling elaborating on its denial of Agee’s bid for a new trial said Agee exercised control over Sargent and married him for the purpose of preventing him from testifying against her.

Their marriage, the court said, was “a sham designed to procure the unavailability of a key witness.”

But the Supreme Court, in a ruling written by Justice Keith R. Blackwell, noted it was a brain aneurysm that killed Sargent years before Agee’s indictment and therefore a natural death, not conduct by Agee, that caused him not to be available at trial.

Blackwell also wrote that the other evidence presented against Agee at trial “was entirely circumstantial and not particularly strong.” The court found nothing definitively identified Agee or anyone else as the shooter.

“While a reasonable juror might conclude that certain statements and conduct of Agee suggested that she was somehow involved in Peters’ murder, the nature and extent of her involvement are far from clear,” Blackwell wrote. “Thus, it cannot be said beyond a reasonable doubt that the admission of Sargent’s statements did not contribute to the verdict.”

Jurors though found Agee guilty in just a little over three hours of deliberation on June 4, 2015. Johnson sentenced her to life in prison.

She’s currently serving her term at the Pulaski State Prison in Hawkinsville.

The reversal was unanimous.