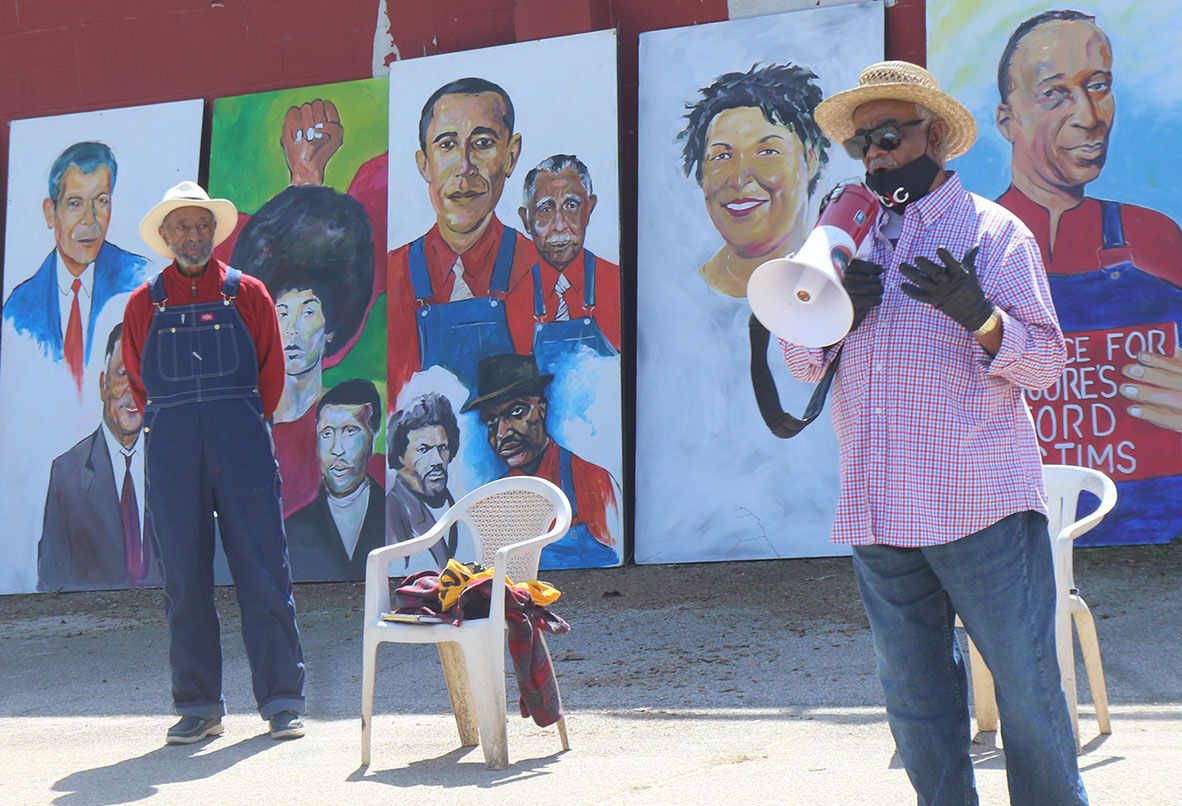 Former state Rep. Tyrone Brooks speaks at the rally in Monroe on Saturday. Looking on is the artist Nathan Knight, who painted murals of prominent African Americans.

Former state Rep. Tyrone Brooks speaks at the rally in Monroe on Saturday. Looking on is the artist Nathan Knight, who painted murals of prominent African Americans.

Seasoned activist Tyrone Brooks publicly passed the baton to the next generation Saturday during the annual Rally for Justice and March to the Bridge.

The rally is held at the First African Baptist Church in Monroe close to the anniversary of the assassination of Dr. Martin Luther King Jr. each year. The event commemorates King’s death and highlights his leadership in the civil rights movement. King was just 39 years old when he was shot on April 4, 1968.

The march that follows the rally remembers the four African American victims of a lynching that took place in 1946. George and May Murray Dorsey and Roger and Dorothy Dorsey Malcom were killed by a white mob after an argument between Roger Malcom and a local farmer.

Brooks, chairman of the Moore’s Ford Movement, said King understood that organized youth would be fearless in the fight for civil rights. King prepared high school and college students in how to conduct non-violent protests, according to Brooks. The local activist said it is time for young people here in Walton County to carry on King’s legacy in working toward racial equity and equality.

“I’m not always going to be here,” Brooks said.

“This is not in our history books,” Robinson said referring to the murders. “There are a lot of people that don’t know about it.”

Robinson asked rally goers why isn’t there an exhibit about the lynching in the local museum.

“Why is it not talked about?” she asked. Robinson said she is working to get a proclamation to commemorate the crime that took place 75 years ago on July 25 and still remains unsolved today.

“And it shouldn’t be that way,” she said.

The F.O.R.M. Facebook page describes the organization as a group of young adults demanding change within their local community regarding systematic racism and discrimination.

“We have to use our voices,” Robinson said.

Other speakers included members of the Southern Christian Leadership Conference.

Self-taught artist and activist Nathan Knight attended the rally and march. Knight’s striking panels depicting influential African Americans and historical figures were displayed as a backdrop for the rally. Knight’s great great uncle was caught up in the 1898 mass riot in Wilmington, N.C., when a mob of white supremacists took over the local elected government and destroyed the Black owned newspaper.

Gareth Fenley with waltontomorrow.com, set up a table before the rally to help register voters. Walton County has grown by 15 percent in a few short years, according to Fenley. Newcomers and visitors are interested in Walton’s heritage, including that of the African American community, she said. Fenley, who is white, commented she is distressed by “what is happening” in the country today. She is affiliated the Athens-based Economic Justice Coalition.