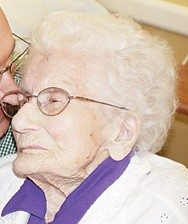 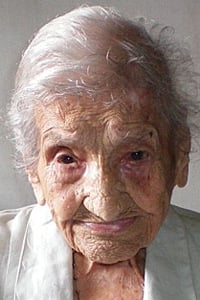 After a Brazilian woman’s family came forward last month, Cooper, who is 114 years old, was stripped of her title by Guinness World Records.

On May 18, Guinness officials said Valentim was 48 days older than Cooper, of Monroe.

Cooper was not told Valentim was older than her.

“We never really told her,” said Cooper's son Sidney “I don’t think she's as aware anymore. We're glad. It’s good to have her No. 1 again.”

Cooper was born Aug. 26, 1896, in Sullivan, Tenn. She moved to Walton County in the 1920s to teach and married Luther Cooper in 1924. He died in 1963. They had four children and 12 grandchildren, plus several great- and great-great-grandchildren.

Cooper was honored as the oldest living person upon the death of Eunice Sanborn, of Jacksonville, Texas, on Jan. 31 at the verified age of 114 years, 158 days. Her family said she was really a year older.

Cooper lives at a Monroe nursing facility and has been visited by Gov. Nathan Deal for her achievement.

A family-only party is planned for Cooper in August when she turns 115.

Leading up to the celebration of her 116th birthday, Besse Cooper will have a bridge named after her during a ceremony Friday.