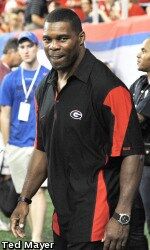 Herschel Walker was elected to the College Football Hall of Fame in 1999.

In a statement late Wednesday afternoon from the Save America political action committee, Trump dangled the idea of a Senate bid by the 1982 Heisman Trophy winner.

Trump wrote: “Wouldn’t it be fantastic if the legendary Herschel Walker ran for the United States Senate in Georgia? He would be unstoppable, just like he was when he played for the Georgia Bulldogs, and in the NFL. He is also a GREAT person. Run Herschel, run!”

Walker campaigned with Trump in Cobb County in September as the president ran for reelection. He praised Trump for supporting prison reform, increasing funding for historically Black colleges and universities and creating economic “opportunity zones.”

After Trump lost Georgia and the election, Walker continued his public support for Peach State Republicans with a television ad urging votes for Sens. David Perdue and Kelly Loeffler.

But both lost runoff races, to Democrats Jon Ossoff and Raphael Warnock respectively.

Walker was an honorary co-chair for the Loeffler campaign as she ran to keep the seat to which Gov. Brian Kemp appointed her. Warnock must run for a full six-year term next year, while Ossoff won’t face voters until 2026.

After dipping his toe in the waters, Perdue said he wouldn’t run for the seat, which Republican Johnny Isakson held until resigning in late 2019, midway through his third term, due to health issues.

Loeffler has created a group called the Greater Georgia Organization, designed to counter Democrats’ recent gains in voter registration and mobilization in the state. She hasn’t ruled out a run for her old seat next year.

Also considering a bid is former Rep. Doug Collins, a Gainesville Republican who finished third behind Warnock and Loeffler in the 21-candidate open primary for the Senate seat. Trump backed Collins but Kemp chose Loeffler, in theory for her ability to connect with suburban white women who had begun to defect from the Republican Party in areas like Cobb and Gwinnett counties.

After Joe Biden carried Georgia by a narrow margin, Trump said he regretted his endorsement of Kemp in the 2018 GOP runoff.

Walker was a three-time All-American running back for the University of Georgia out of Wrightsville, Georgia. As a freshman, he helped the coach Vince Dooley’s Bulldogs win a national championship.

Walker played for Trump’s New Jersey Generals in the United States Football League, then had a long NFL career.

Herschel Walker could bring a much needed breath of fresh air to the Georgia political scene.

He is a hard working, caring individual of good character. That is exactly is exactly the type person that the media will viciously attack.

Herschel you are admired for who you are and what you stand for. Think and pray about it before jumping in.