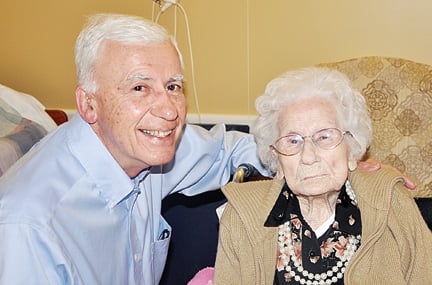 Besse Cooper with her son Sidney at Park Place Nursing Home in Monroe after they learned Besse is the oldest person in the world. 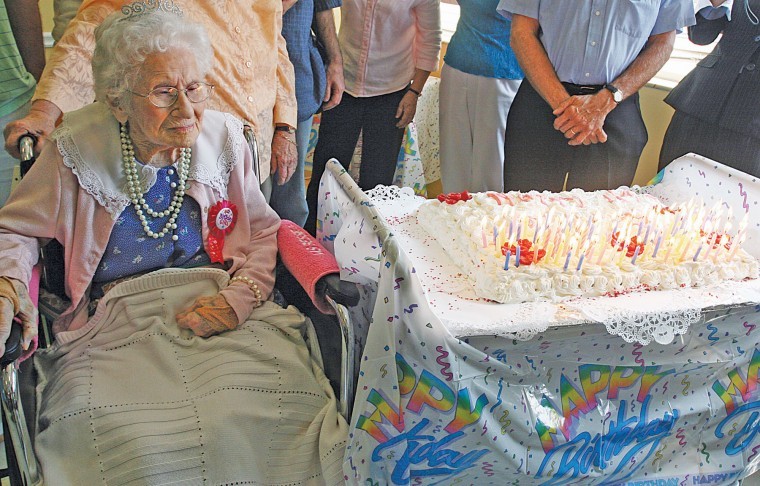 Besse Cooper, of Monroe, was the third-oldest person in the world as of her 114th birthday on Aug. 26, 2010. Friends, family, media representatives and Monroe Mayor Greg Thompson were on hand to celebrate her birthday with her. 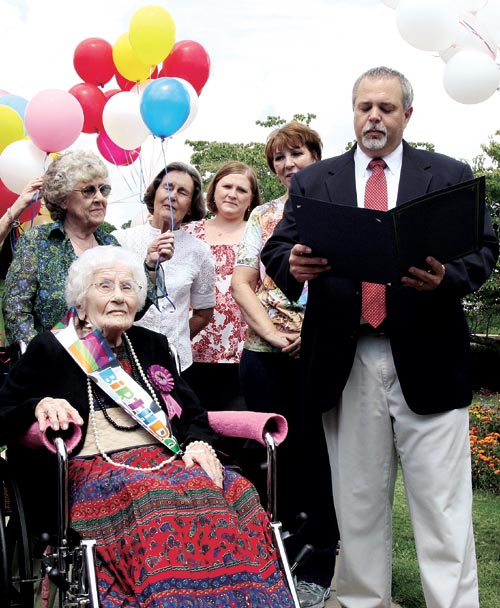 Monroe Mayor Greg Thompson reads a proclamation declaring Aug. 26, 2009, as 'Besse Cooper Day.' Cooper, seated, is the 12th oldest person in the world and lives in Monroe.
1 of 3

Besse Cooper with her son Sidney at Park Place Nursing Home in Monroe after they learned Besse is the oldest person in the world.

Besse Cooper, of Monroe, was the third-oldest person in the world as of her 114th birthday on Aug. 26, 2010. Friends, family, media representatives and Monroe Mayor Greg Thompson were on hand to celebrate her birthday with her.

The little city of Monroe is now home to the world's oldest living person.

Besse Cooper earned that distinction Monday following the passing of Eunice Sanborn, of Jacksonville, Texas, at 6 a.m. CST, as reported by The Jacksonville Daily Progress. Sanborn's death left Cooper at 114 years and 158 days the oldest living person in the world. Sanborn's verified age was 114 years, 195 days. Her family, however, has said she was 115, citing a U.S. Census error as listing her birth year as 1896, instead of 1895.

As the news of Cooper's new status was breaking around the world, the supercentenarian was sleeping peacefully in her new accommodations at Park Place nursing home in Monroe.

"I was visiting her earlier in the day, but we didn't know at that time," said Cooper's son, Sidney, 75, also of Monroe. "My sister-in-law called after we got home and told me she'd heard from my nephew in Amsterdam. It was only after that I got a call from Robert Young of the Guinness Book of World Records."

Cooper, who at that time was the world's third-oldest person, was visited by Young Aug. 26 on the occasion of her 114th birthday for inclusion in the 2011 Guinness Book of Records. A birthday celebration was held for her at the Walton Regional Medical Center nursing home - where she was living at the time - with newspapers, TV stations and a representative from the Guinness Book of Records in attendance. Mayor Greg Thompson also was there to wish her well and proclaim Aug. 26 Besse Cooper Day in Monroe.

Sidney Cooper said his mother was told she is the oldest person in the world Monday night by his son, Paul.

"Paul said she said, ‘I am? I should get a box of chocolates - assorted,'" Sidney Cooper said. "I don't know where she got the assorted from."

Tuesday morning, as Cooper was getting her hair done for the expected flood of cameras and television crews, she said she didn't feel old, crediting her longevity to "minding my own business."

When asked if he knew the secret to her longevity, Cooper's son said, "That's what everyone wants to know."

"A lot of medical people have commented and have interviewed her and even drawn blood samples," Sidney Cooper said. "Boston Medical, another unit out of California and the University of Georgia - many have wanted to know. The only thing I can think of is she was always outdoors - working in the garden. She ate pretty much what she wanted to, but she always ate healthy."

Cooper has said her secret to longevity is not eating junk food. She was born Aug. 26, 1896, in Sullivan, Tenn. and moved to Georgia in the 1920s, marrying Luther Cooper in 1924. She was widowed in 1963. A school teacher, Cooper lived in the community of Between for many years, teaching at the old Between School. She has four children, 12 grandchildren and many great- and great-great-grandchildren.

Her son said she appears to be doing well at the moment, although she isn't eating quite as well as she used to and she does sleep more than she used to. When asked whether he thought his mother's good genes had been passed onto him, giving him a shot at mirroring her longevity, Sidney Cooper said he doubted it.

"I think I've had too much fun," he quipped, adding later that he hoped so.

Celebrating a life longer than most

For some time, one of the most notable citizens in Walton County has been its oldest.

That's amazing to have lived that long! However, today ( Feb.3, 2011) i watched a news report that said the oldest living person in the world is a Cuban woman who is 126 years old! Born in 1885!

[smile] The oldest living person in the world is Cicilia Laurent, she was born on January 31st, 1896. Now she just got the statut of permanent resident of Canada. She left Haiti after the Heatquake. Check out lemonde.fr for more infos.