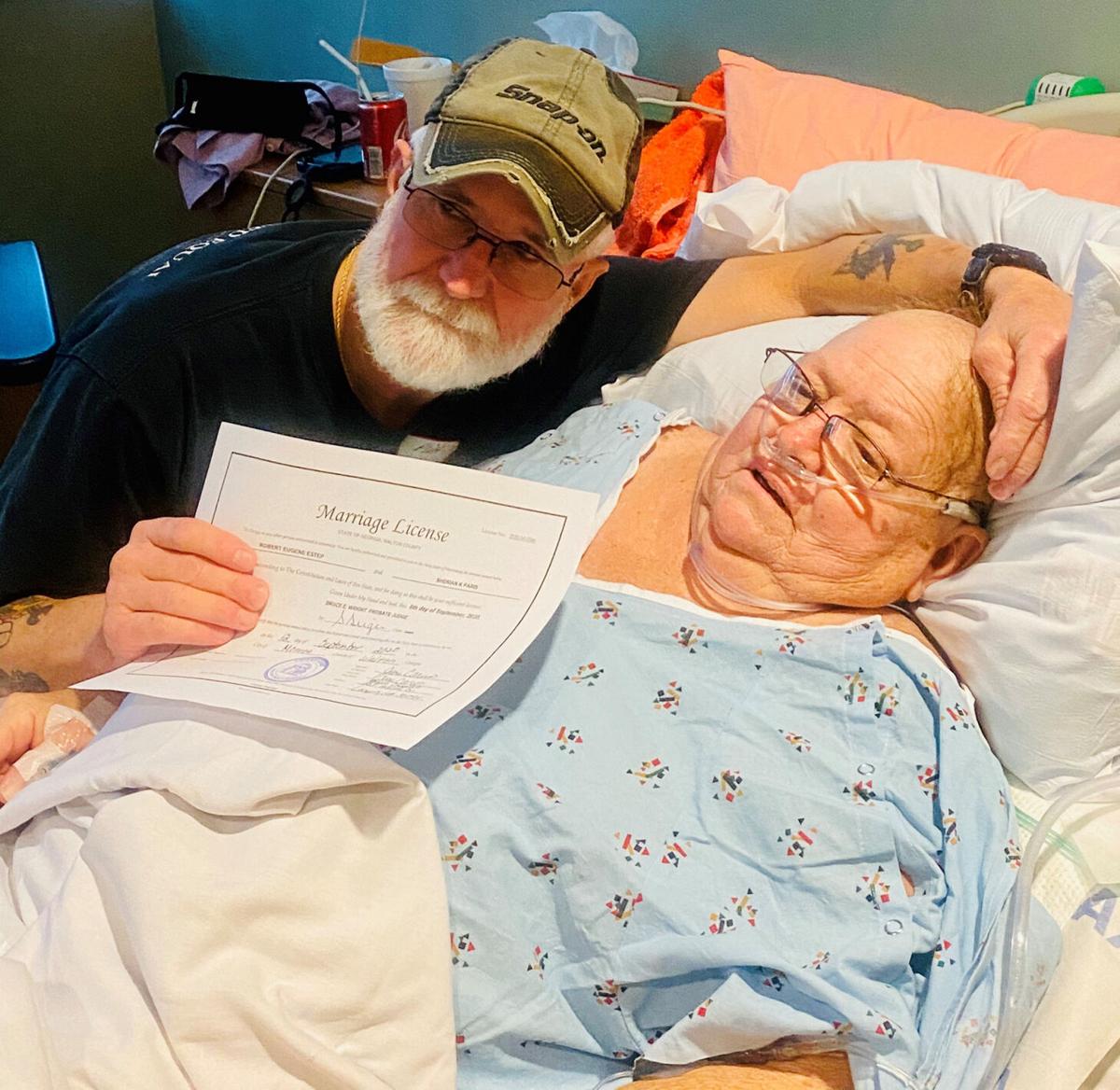 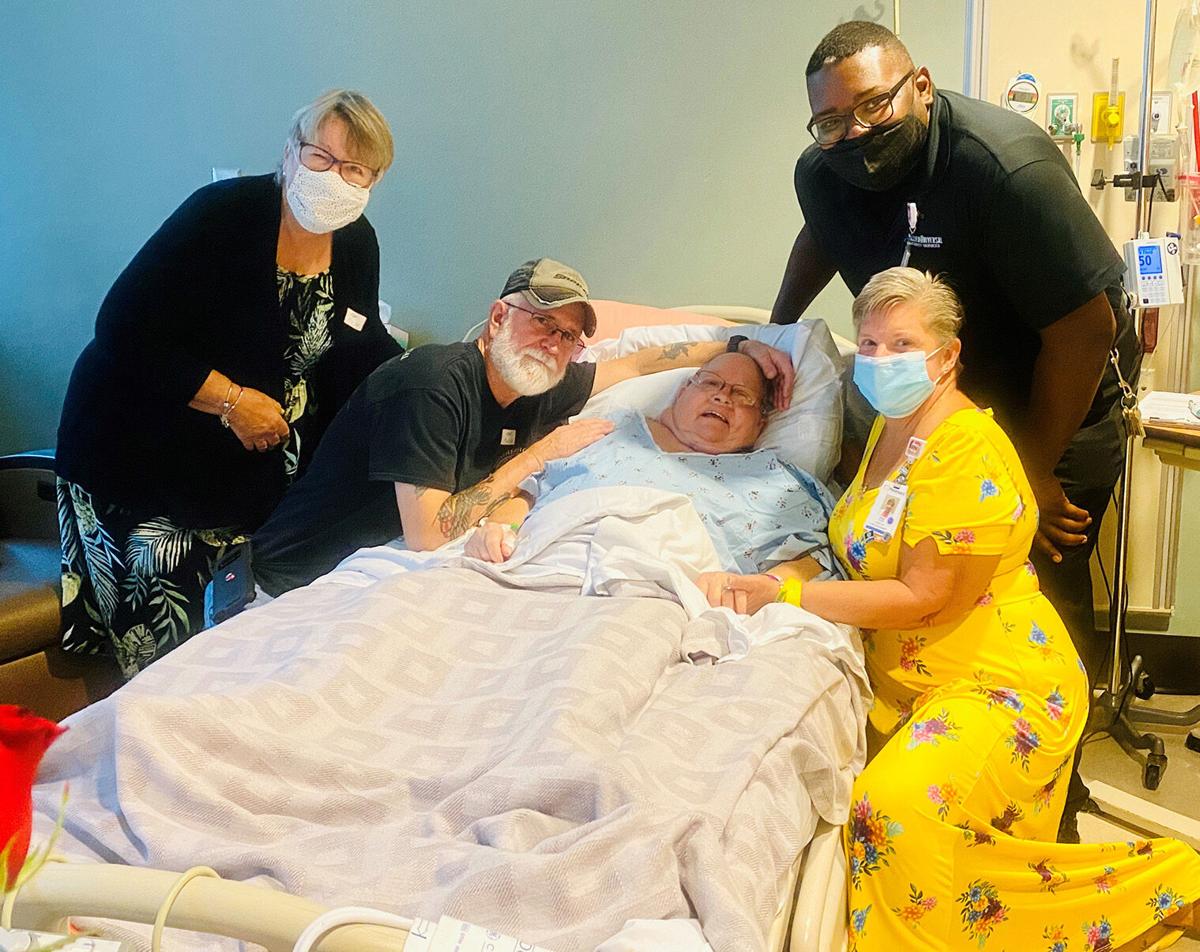 Piedmont Walton staffers pitched in to make the wedding of Sherian Paris and Robert Estep special. They said their ‘I do’s’ on Saturday, Sept. 12, 2020, while Paris fought cancer, and she died Saturday, Sept. 19. Estep called the ceremony in unusual circumstances ‘different but heartwarming.’

Piedmont Walton staffers pitched in to make the wedding of Sherian Paris and Robert Estep special. They said their ‘I do’s’ on Saturday, Sept. 12, 2020, while Paris fought cancer, and she died Saturday, Sept. 19. Estep called the ceremony in unusual circumstances ‘different but heartwarming.’

Robert Estep and Sherian Paris had been a couple for decades without ever quite tying the knot.

“We’d been together 20 years,” Estep said. “We’d always talked about getting married. When we’d been together about a year, I asked her to marry me and she said yes, but we never set a date. Life just intervened.”

But when Sherian found herself in her last days, dying of a cancer which had spread to her spine and brain, leaving her bedridden, she told her long-time partner it was time to take care of that little problem.

“We considered ourselves married already,” Estep said. “But she said it was time to go ahead and do it. We were going to have a small ceremony at home with just a few friends and family.”

The couple secured a marriage license and set a date for Sept. 20, but then Sherian’s condition took a turn for the worse. Already in hospice care at her Loganville home with Robert, she was rushed to Piedmont Walton for palliative care and told Estep it was time to move ahead with the ceremony.

“She said we better go ahead and do it,” Estep said.

Estep approached the nurses and asked if there was a chaplain on staff who could conduct the ceremony and he said they got fully into the spirit of the occasion.

“They came in, decorated the room, ordered us a cake and everything,” Estep said. “They went all out and did real good.”

On Saturday, Sept. 12, nearly two decades after they first considered it, Estep and Sherian Paris were wed, he standing alongside his blushing bride’s hospital bed as they took care of the long-pending event at long last.

“It was interesting,” Estep said of his hospital room wedding. “It was really nice, considering the circumstances.

“It was different but heartwarming. I don’t really know how to describe it, but she was happy.”

They followed up the ceremony with pieces of Sherian’s favorite cake, a caramel pound cake, and celebrated the newlyweds.

There was, alas, no honeymoon. Sherian returned home with her husband to finish her last days in hospice, dying one week after her wedding, on Saturday, Sept. 19.

“She had a big old smile on her face,” Estep said. “When she was going, even then, she was worried about me, not her.”

At her wishes, there will be no funeral arrangements for Sherian, who will be cremated this week without ceremony.

Estep said he was just glad he could finally give her the wedding she’d wanted, even if it was a bit different than they might have once suspected.

“It made her happy,” Estep said, adding it was hard to go forward without his new bride.

“I love her and I miss her. It’s lonely around here now.”