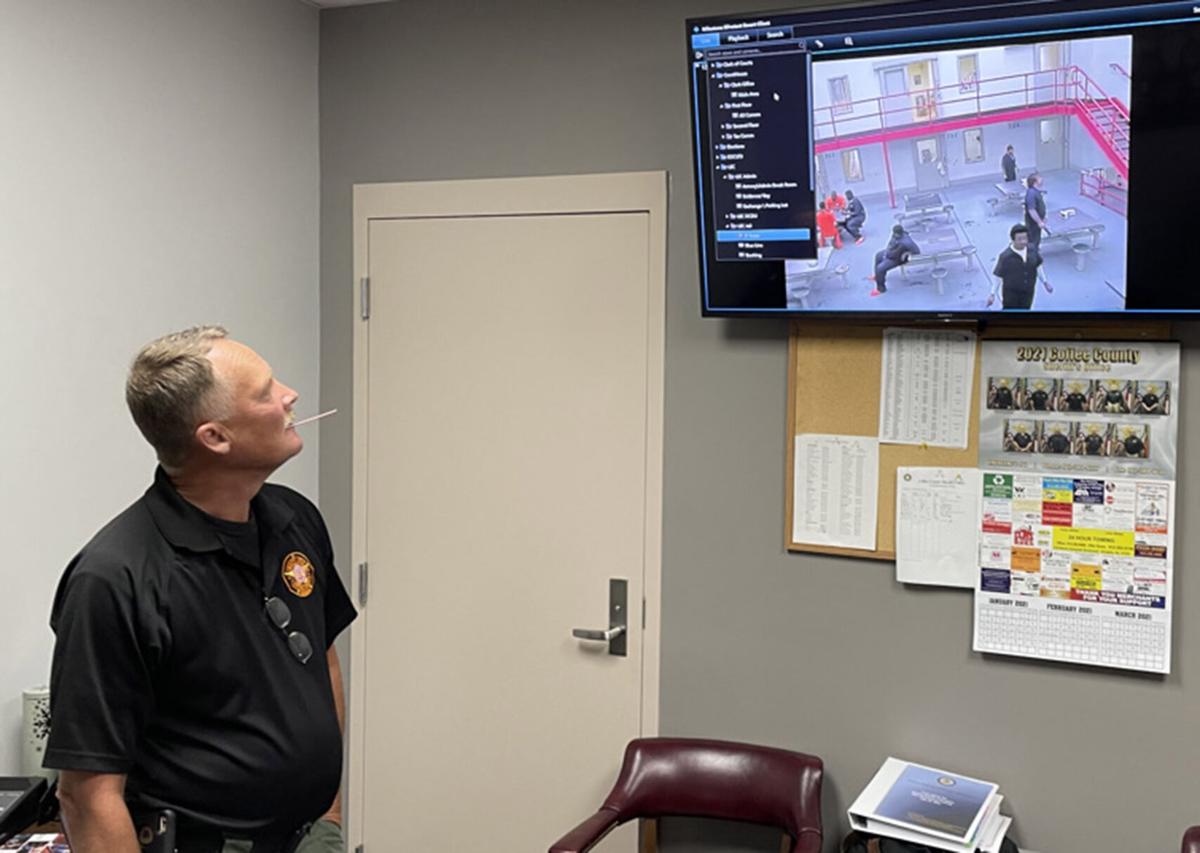 Capt. Marc Smith of the Coffee County Sheriff's Office watches activities in the county jail from an office on Wednesday, July 21, 2021, in Douglas, Ga. 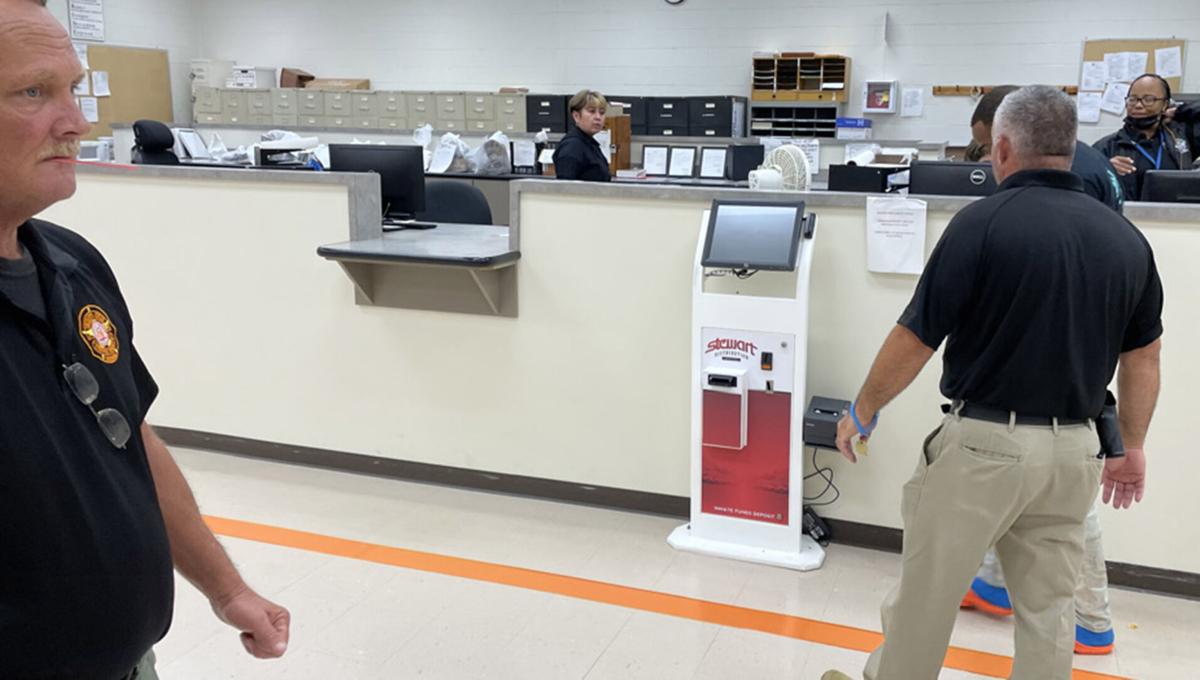 Chief Deputy Fred Cole, at right, escorts an inmate in the booking area at the jail in the Coffee County Law Enforcement Center on Wednesday afternoon, July 21, 2021, in Douglas, Ga. Capt. Marc Smith is at left. 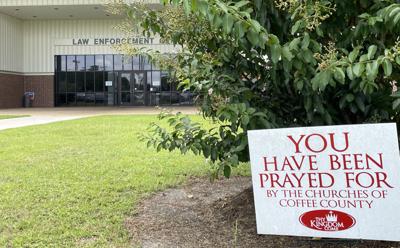 DOUGLAS, Ga. — Usually, if folks from Walton County come this far south of the Gnat Line, they’re going to keep on until they hit the beach.

But in recent weeks, a steady stream of elected officials has been making Douglas a destination for an unlikely spot: the Coffee County Law Enforcement Center.

They want to see the jail.

Walton County Sheriff Joe Chapman has said the Coffee County jail is a model for what he’d like to build back in north Georgia.

“That’s one we looked at and liked the most,” Chapman said.

“The majority of the ideas are coming from Coffee County — just the layout of it, the way it operates.”

In fact, Chief Deputy Fred Cole of the Coffee County Sheriff’s Office said he regularly gives tours to law enforcement officials from across the country when they’re looking to build.

Construction started in 2008 and the Law Enforcement Center opened in 2010. The building features not just the jail but the Sheriff’s Office staff and Coffee County Magistrate Court, plus the county’s drug unit. It was built through a special purpose local option sales tax after a federal judge ordered the county to improve its jail.

Chapman has warned Walton County could be in for the same fate.

“I promise you, it will happen,” Cole said. That means court oversight into all operations of a jail.

“They checked us for everything,” he said.

Chapman has been speaking about the need for a new jail for years. A 2011 SPLOST was supposed to fund it, but no plan ever went forward. The money is sitting in an interest-bearing county account.

But a change in chairman of the Board of Commissioners — David Thompson, a Republican from Monroe, took over in January — has given the project new life. And the board voted 6-0 this month to approve a real estate purchase and donation agreement for a little more than 21 acres between East Church Street and the Government Building on South Hammond Drive.

Should Thompson complete the deal — and he has until the end of the year at the $500,000 price negotiated — the property would be the site of a Walton County Public Safety Complex.

Much like the Coffee County Law Enforcement Center, the Walton building would house the jail and the Sheriff’s Office.

Walton, however, could see the county ambulance service join other first responders in the new center.

Chapman has said the East Church Street property’s proximity to the Government Building, where Walton County has Magistrate and Superior courts, would be a boon for safety and cutting costs.

Inmates could be walked across a secure yard to the courthouse, or a tunnel might be built connecting the two buildings.

In Douglas County, the Government Building is about 2 miles from the jail — about the same distance between Walton County’s jail and courthouse.

It’s the one regret Cole has about his jail.

“I wish Superior Court would move over here, but they’re not,” he said.

Chapman likes the idea of being next to the courthouse for other reasons too.

“Taking pleas, signatures of documents, investigators being able to get there — all that sort of stuff versus having to get in the car and drive a few miles down the road, and people may say, well that’s no big deal, but on the scale they have to do it, that makes a difference,” he said.

That might boost the case for Chapman in getting the jail on Church Street, but opponents of the proposed jail site would note the Coffee County jail isn’t in a neighborhood. It’s surrounded by an auto repair shop, a distribution center and trailer dealers.

Cole says the way the jail is built, with a steel superstructure, is another asset. Infrastructure, such as electrical and HVAC, are in walls separated from the jail.

That means workers who visit the jail never interact with the inmates.

But while the Coffee County Sheriff’s Office is continuing to make upgrades as the jail moves into its second decade of operations — it recently added a padded cell for inmates on suicide watch, and purchased an X-ray machine to scan people at booking — Walton County is far from that point.

“We’ve had plans for quite some time,” Chapman said. “The problem with the plans is, those same plans have tripled in price since we got all those.

“Everything was there in place other than someone making a decision to do it, so it ain’t like he (Thompson) had to come in and start from scratch.”

The Coffee County Law Enforcement Center is a model for the type of jail Sheriff Joe Chapman envisions for Walton County. That has been a point of opponents of the plans for placing that facility on East Church Street. Photos began to circulate on social media of an imposing brick structure — but that wasn’t the jail Chapman and county commissioners have visited. That is the Coffee Correctional Facility in Nicholls, Georgia, which has a capacity of more than 2,600 state inmates.

Looks like the article left out something important. The Coffee County jail is located in an industrial area, not a residential area.

I thought I was fairly clear on that point: "… opponents of the proposed jail site would note the Coffee County jail isn’t in a neighborhood. It’s surrounded by an auto repair shop, a distribution center and trailer dealers." There are also maps to compare the areas.