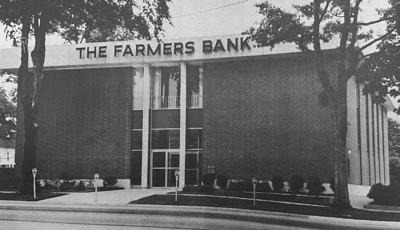 Nowell Briscoe is a former Monroe resident living in Atlanta. He writes a monthly column on the history of Walton County. His email address is nowellbriscoe@bellsouth.net.

In today’s banking world where everything is instant this, that and the other and the buttons we push from our iPhones automate almost every phase of our banking is a far cry from the old way of banking that was done by customers back in the day of the Bank of Monroe and the Farmers Bank.

Bank has long history in Walton

After the Bank of Monroe began operation in 1891, a new bank was established on Jan. 1, 1906, at the corner of Broad Street and West Spring Street.

The day following the charter, a meeting of the stockholders was called for the purpose of organizing. A.J. Arnold was elected chairman.

The bank was organized with capital of $35,000 — 350 shares at $100 each. There were 36 original stockholders. The first board of directors consisted of A.J. Arnold, J.W. Arnold Jr., Breedlove, W. H. Broach, E.B. Cowan, Pannell and Wood. Officers elected at that meeting were A.J. Arnold, president; H.G. Nowell, vice president; and Breedlove, cashier.

Charles R. Bradford, who had been cashier since Feb. 1, 1921, was named president on Jan. 3, 1938. During 1940-41, Mr. Bradford served as president of the Georgia Bankers Association and became chairman of The Farmers Bank’s board of directors on Jan. 3, 1956, and was succeeded in the presidency by George W. Baker.

For many years the bank transacted business in the building on the corner of Broad and West Spring Street with remodeling taking place in 1910, 1928, 1940 and 1956.

In the May 24, 1940, issue of The Walton Tribune, a front page article stated, “Farmers Bank Will Have New Building.” It stated:

Contracts were bid Monday for the enlargement and remodeling of The Farmers Bank, and blueprints for the new structure call for a much larger and finer looking building to house the popular institution.

The new bank quarters will include the space formerly occupied by the City Market and will have a frontage of 36 feet. The front will be built of Indiana limestone and black granite will be used to trim the central entrance and form the lower part of the front. The rear and side of the building will be finished in stucco.

The lobby of the new building will be greatly enlarged and the floor will be marble. Private offices for the bank’s officers will be constructed and the office for Mr. H.M. Arnold will be built at the back of the bank with a private entrance.

Plans for the handsome new interior include the installation of modern new fixtures, the elimination of all the bars and grillwork so long symbolic of a banking house. New lighting fixtures will be added along with new large side windows.

The Tribune congratulates President C.R. Bradford and his capable board of directors upon this step forward and anticipates the completion date will enhance the appearance of Monroe’s fast improving business district.

And as reported in the Sesquicentennial Edition of The Tribune in 1968:

Since its beginning, The Farmers Bank has been active in progressive steps in strengthening the agriculture of the county. In 1945, George W. Baker accepted the post of full-time farm representative to work with local farmers in improving their practices, diversifying their incomes, adding new cash crops and coping with other farming-related problems.

During that year the bank was helpful in organizing a grade “B” milk route and was influential in raising the quality of milk produced and cooperated in organization of the Walton County Diary Association.

In 1949 The Farmers Bank was chosen by the Georgia Bankers Association to receive the Trust Co. of Georgia’s Robert Strickland Memorial Award for outstanding contributions to local agriculture during the previous year. The bank received a bronze plaque and a $2,000 scholarship for use by a promising young agriculturalist.

A number of corn growing contests for farmers, 4-H’ers and FFA members have been sponsored by the bank and it continues its policy of working closely with the county agent, vocational leaders and youth groups.

In the spring of 1965, work began on a new building on the land which formerly housed the Hotel Monroe. The 63-by-88 foot, two-story brick building had about 11,000 square feet of space and had in reserve a 5,500-square-foot basement in anticipation of future expansion. A drive-up window and a private parking lot were added customer conveniences.

The new quarters were occupied May 9, 1966, and since that time the blue and gold lobby and the six private offices on the main floor were the scene of much activity. On the second floor was a community room with seating capacity of 75, available for use by civic groups.

In 1971 a branch was opened at Monroe Plaza Shopping Center with Jim Kidd serving as branch manager.

As the years passed and big banking conglomerates noticed the progress of the smaller banks in the region, they began buying up these smaller banks, taking away the long held personal touches Monroe customers had grown to know and appreciate. What Monroe citizens once knew as local, home-owned banks were no more; instead many of those who held long time positions with the banks were replaced with outsiders which took away the secure feeling of knowing those you dealt with.

It always gave me a sense of comfort going into The National Bank of Monroe and seeing friendly faces I had known for so long; those folks, just like those at The Farmers Bank, were ones you had known for so long and knew they would handle your banking needs with a smile and a personal touch.

Bank personnel change like the wind these days. As soon as you develop a rapport with a teller or officer in a few weeks or a month, they are replaced with a new person you don’t know and start the process all over again. Even with all the new apps and instant banking cyberspace now offers its customers, I would still prefer to have a person you know and trust to handle my finances, one you know has your best interests and well-being at heart.