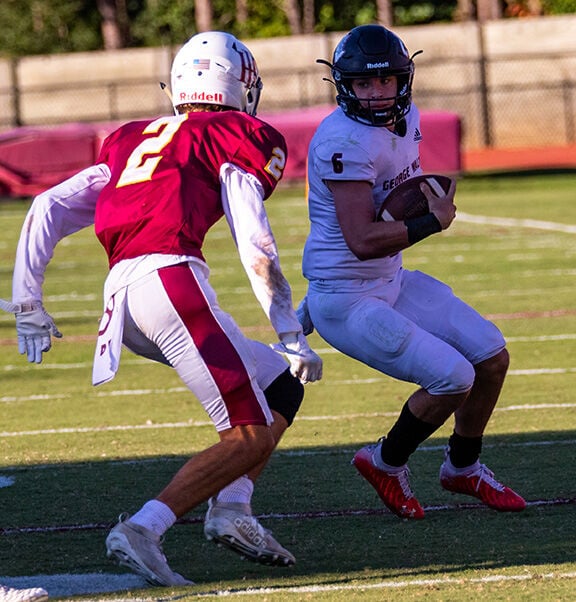 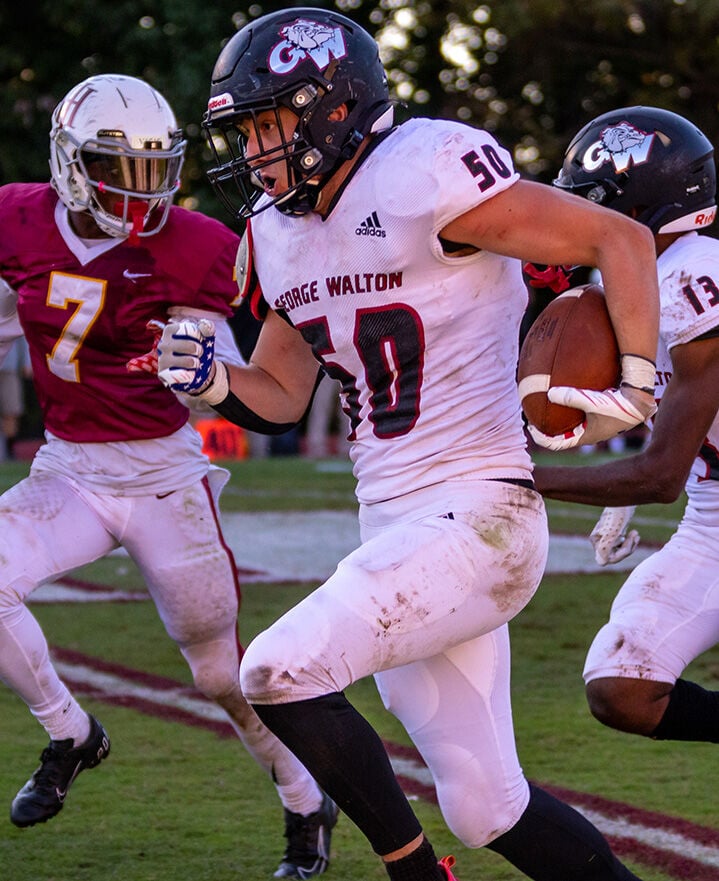 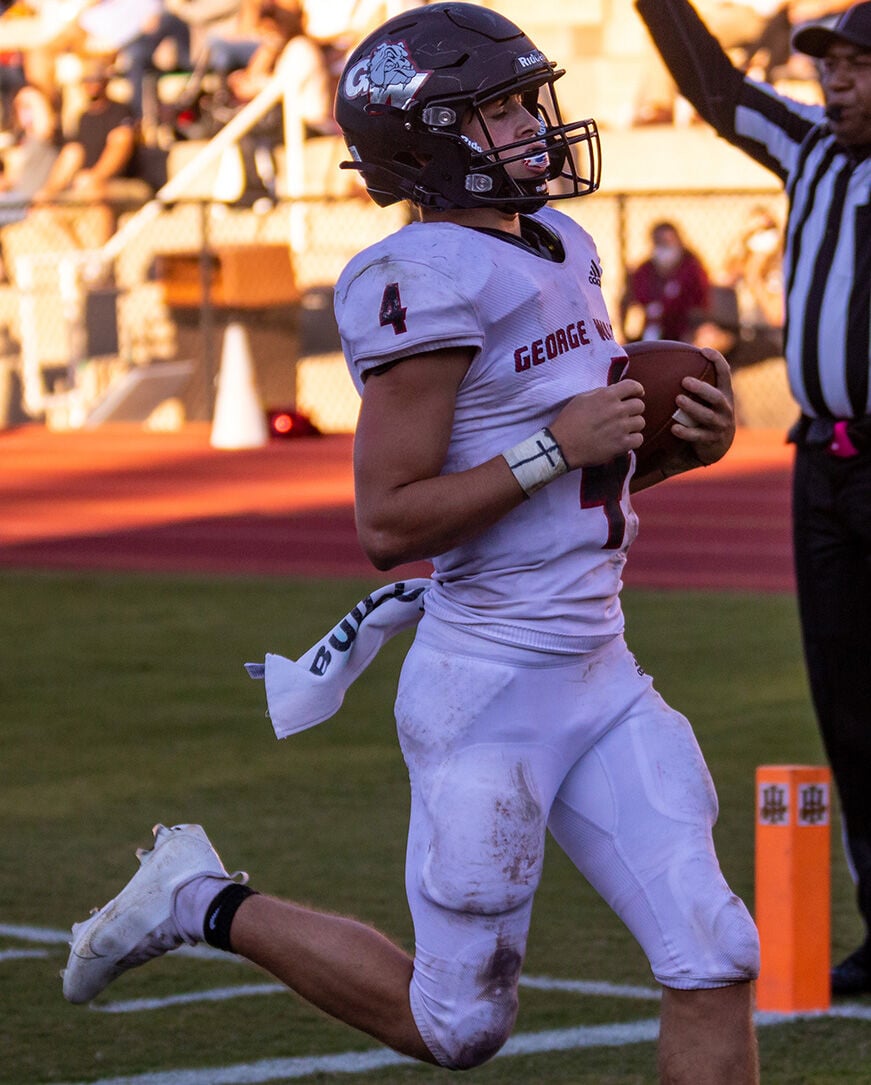 Jake Whitten crosses the goal line, scoring a touchdown for George Walton in the final seconds of the third quarter in the Bulldogs’ game at Holy Innocents’ Episcopal School on Friday afternoon, Oct. 16, 2020, in Sandy Springs, Ga.

Jake Whitten crosses the goal line, scoring a touchdown for George Walton in the final seconds of the third quarter in the Bulldogs’ game at Holy Innocents’ Episcopal School on Friday afternoon, Oct. 16, 2020, in Sandy Springs, Ga.

George Walton Academy got three touchdowns from quarterback Gavin Hall and a huge fourth down stop in the final seconds to beat eighth-ranked Holy Innocents’ 28-21 in a nonregion high school football game Friday.

It was the first time the Golden Bears ever lost on their home campus field and preserved the Bulldogs’ spotless record at 4-0 heading into Region 8-A (Private) play next week.

Chris Corillo kicked the first of three extra points on the afternoon.

But the Bulldogs answered with Hall’s 41-yard touchdown pass to Jackson Ellerbee. Dominic Williams kicked it to 7-7 with 2:23 to play in the first quarter.

Holy Innocents’ came right back with a 42-yard run on the next drive to close the opening period and scored again in the first minute of the second quarter, on Joe Hingson’s 5-yard touchdown run.

Three rushes by TyQuann Alexander and a 17-yard pass to Drew Bonner from Marshall Nichols drove the Bears down the field.

GWA drove 37 yards on the next series with runs by Ellerbee, Hall and Jake Whitten, but the Bears got a fourth-down stop.

The Bulldogs returned the favor as Holy Innocents’ drove in the final two minutes of the half. On a fourth-and-6, Trae Adkins picked off a pass and returned it 36 yards.

In the hurry-up offense, Hall dashed off a 19-yard pass to Whitten for a first down at the HI 10-yard line, then went 5 more yards to Laythan Folgman on the fresh set of downs.

Eleven seconds and a play that lost a yard later, Hall took it in himself for a 6-yard touchdown run just 33 seconds before the break.

Holy Innocents’ tried to reclaim the lead in the third quarter, marching to the George Walton 8 before a fumble recovered by Michael Dagenhart.

But the fumble set up a 92-yard drive for George Walton.

Runs by Whitten, Adkins, Hall and Ellerbee, and a 26-yard pass to Ellerbee from Hall, set up Ellerbee’s 24-yard touchdown run with a little more than four minutes remaining in the third.

Again the Holy Innocents’ offense marched, but after 41 yards the GWA defense stiffened again. David Lalaian picked up a fumble and returned it 51 yards to the Bears 20-yard line.

That set up Hall’s 17-yard touchdown pass to Whitten just two seconds before the end of the third quarter and handed GWA a 28-14 lead.

Alexander did his best to get Holy Innocents’ back in the game. He handled the load on the Bears’ next series, rushing a combined 46 yards before the Bulldog defense again got the stop on fourth down.

George Walton drove from there, but a drive that would have put the game out of reach ended on a fumble recovered by the Bears’ William Willis.

Within a minute, Christian Pagett hit Nichols for a 31-yard gain, then Nichols ran for a 6-yard TD midway through the fourth quarter.

A quick three-and-out by GWA — aided by a sack by Hayes Reifenberger and Jack McGinty — gave Holy Innocents’ the ball at midfield with 4:34 to play.

Nichols made a long run after the Bears got in a hole on first down to take it to the GWA 37, then threw to Zach Jackson for 9 yards.

After runs by Nichols and Alexander, Nichols scrambled again to the Bulldogs 5-yard line.

But a sack, a fumble — which Holy Innocents’ recovered — and an option play that lost 9 yards left the Bears facing a fourth-and 15.

George Walton forced an errant pass that sealed the win.

The Bulldogs will be on the road Friday as they start region play. GWA will visit Athens Christian.

Holy Innocents’ has homecoming on Friday against Providence Christian at Hoskyn Stadium in Sandy Springs.